The Magic of a Mokoro Ride in the Okavango Delta

There is no more dazzling way to experience Botswana’s Okavango Delta—the enormous fan-shaped wetland expanse formed where the Okavango River empties into the Kalahari Desert—than by exploring it in a traditional mokoro, or dugout canoe. 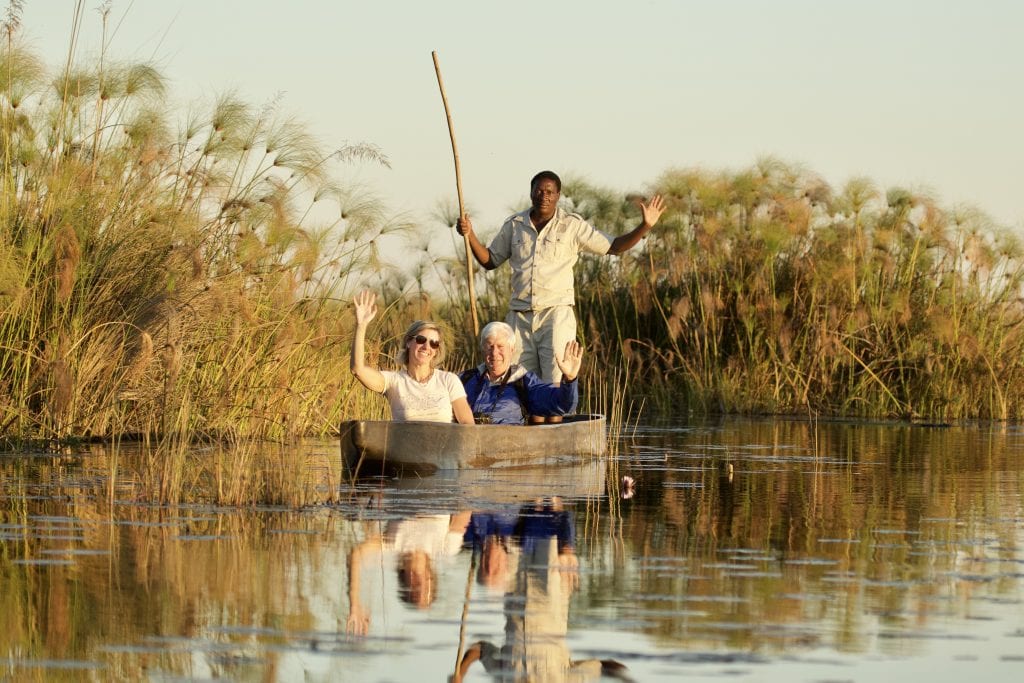 If you’ve dreamed of visiting the Okavango, you likely already know about the region’s mind-boggling density and diversity of wildlife: An estimated 200,000 wild migratory creatures move through the area each year, including more than 150 different mammal species and 500 species of bird.

What you might not fully realize until you arrive, though, is just how different your wildlife-viewing experience may be in the Okavango than in other safari destinations. While you’ll still have plenty of opportunities for thrilling traditional game drives, the watery topography here means that, in many parts of the delta, travelling by boat is by far the most efficient way to get around. Which is exactly why local tribes have for centuries used mekoro as a primary form of transport.

Traditionally, mekoro have been made by hollowing out the trunks of mature, straight-growing trees, such as jackalberry or sausage trees (so called because of their dangling fruits, which evoke salamis hanging in a butcher-shop window). The resulting canoes are about 20 feet long, with a slim blade-like shape ideal for piloting through the delta’s narrow, reed-lined waterways. Each mokoro, which can seat one or two passengers, is steered by a single “poler,” a seasoned guide who stands at the tail end of the craft and pushes it along with a long wooden pole called a ngashe.

While many mekoro today are being made from fiberglass rather than wood in an effort to conserve the Okavango’s old-growth trees, in most other regards a modern mokoro journey is no different than those made by local fishermen and villagers a hundred years ago. Your jaunt as part of a luxury Botswana safari with Micato will likely go something like this:

You’ll begin by boarding mekoro—along with your Micato guide and others in your party—at the waterfront just outside your luxury safari lodge. Standing in the stern will be your dedicated poler, a local tribesman who will have spent his entire life skillfully navigating among the delta’s maze of interconnected waterways. Once you’re comfortably settled, you’ll push off, and be immediately struck by how quietly your canoe glides through the water.

That quiet will let you fully savour the wetlands’ cacophony of sounds as you progress among channels, lagoons, and palm-fringed islands: the trilling and warbling of hundreds of birds, the croaking of tiny reed frogs, the hum of insects, the burbling of half-submerged hippos and the splash of crocodiles sliding from the riverbanks into the water. Further off, you might hear the trumpeting of elephants approaching to wallow or drink, or the eerie yips of African wild dogs or hyenas.

The maneuvering of your expert poler also gives you a unique and close-up vantage point over the species that throng the delta’s waterways. You might float just beyond a bank where an entire herd of elephants—including calves—is wading and dousing themselves; you might spy one of the delta’s rare, swamp-adapted antelope species, like strikingly-striped sitatunga or swoop-horned sable antelope, dipping their heads to drink while keeping a watchful eye for lions. You might watch as iridescent kingfishers or fierce raptors dart from overhead branches to spear fish from the water. You might just marvel at the masses of water lilies floating along the water channels, and the way the clouds are mirrored in the still surface of the widest lagoons.

Regardless of what you see on your mokoro ride, the experience is sure to be one of the dreamiest and most enchanting parts of your Micato itinerary. To start planning your trip to the Okavango Delta—and your mokoro excursion—talk with one of Micato’s safari experts today.

Up Next: These Are Some Funny Cats