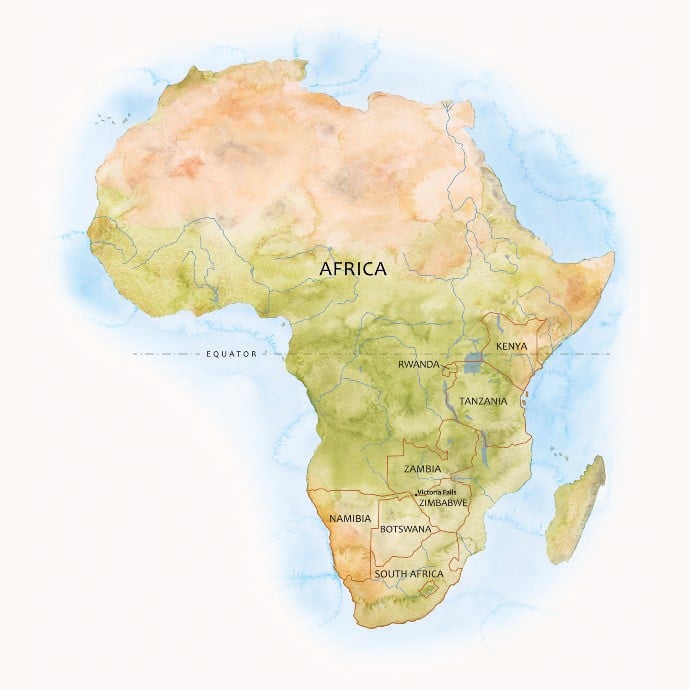 Africa is majestically vast, larger than three contiguous United States, with more than 131 Connecticuts thrown in for full measure. Its 54 countries—the most of any continent— range from the world’s 10th largest (Algeria) to its 198th largest (the Seychelles). The continent’s geographies are  fabulously varied: it contains the earth’s fiercest desert, the Sahara, and—with much magnificence in between—the glaciated peaks of East Africa (yes, Kilimanjaro, Mount Kenya and the Rwenzori Mountains still have glaciers!), with just about every climate zone on earth (except, perhaps, polar, though it’s pretty cold on those icy peaks). And that’s not to mention that the continent has more, and more unique, animal species than any other…something this website goes into some length about, just about everywhere.

We’re map browsers, so please pardon the geo-trivia. And if you are too, read on about the eight red-bordered countries Micato safaris in, and we’ll tell you a bit about them, with links to more info. (Oh, and there’s one with a red border around it that we don’t safari in, little Lesotho, near the middle of South Africa.)

Micato was born in the Pinto family home, very near the Kenyan coffee plantation at the foot of the Ngong Hills where Baroness Karen Blixen lived and thrived and was inspired to write her heart-stirring classic Out of Africa (under her much better known pen name, Isak Dinesen).

The only country on earth named for a mountain, Kenya is also the birthplace of modern safaris, thanks to its 54 national parks and game reserves, both public and private, and the lodges and camps that do so much to keep its huge animal population (25,000 species, including 390 mammal species) safe and free-roaming.

More than a third of Tanzania’s 364,000 square miles are set aside in national parks and conservation areas. Like Kenya, its northern neighbor, Tanzania is a land of great contrasts, from the frosty summit of 19,341-foot Kilimanjaro to the animal-thronged savannas of the Serengeti and the white sand beaches of Zanzibar.

The annual migration of more than two million zebras, wildebeest, gazelles, and their accompanying predators in the Serengeti-Maasai Mara, which straddles the Kenya-Tanzania border, is the greatest and most dramatic mass movement of large animals on earth.

Wisely regulated diamond mining and tourism have made Botswana, one of the most sparsely populated countries on the planet, one of Africa’s most prosperous; its multi-faceted Human Development Index is the highest in Sub-Saharan Africa.

More than 70 percent of Botswana’s 224,000 square miles is taken up by the fabled Kalahari Desert. Micato’s safaris in Botswana largely concentrate on the Okavango Delta, an endorheic basin in the great desert’s north, where the Okavango River, frustrated in its natural riverine effort to reach the sea, creates a lush, animal-rich wonderland whose “very existence in the middle of the Kalahari Desert is nothing short of miraculous…like a dream,” as the great photographer and writer Frans Lanting writes.

A jewel of a country—just a little larger than Vermont—Rwanda is an emerald green scenic showcase: sparkling lakes under high, mist-draped volcanoes (two of them higher than any mountain in the contiguous US), and its capital, Kigali, is famously inviting and jazzy. (Interesting, non-trivial fact: 61% percent of Rwanda’s parliamentarians are women, the highest percentage of any legislative body in the world.)

Micato’s main focus in Rwanda is Africa’s first national park, Parc National des Volcans (established in 1925), where, based from some of Africa’s most beautiful loges, we make carefully guided, familially friendly visits to one of the last surviving populations of mountain gorillas.

After many years of post-colonial turmoil, Zimbabwe has re-established itself as a classic safari destination. Hwange National Park’s bush country is quintessentially East African: rumbling families of elephants, predators on the prowl, pleistocene rhinos, and graceful ungulates aplenty.

And, not far from Hwange, in Zimbabwe’s far west, one of the greatest sights on earth: Victoria Falls, the Mount Everest of waterfalls, about which we rhapsodize many times on this website.

South Africa likes to bill itself as Many Worlds in One Country, for good reason. Twice the size of France (it’s the largest country south of the equator), with a beautiful, 1,700-mile coastline on two oceans; one of Africa’s largest and most bountiful national parks, Kruger; a high and personality-rich collection of peaks, the sometimes snowy Drakensbergs.

But its scenic and human masterpiece, as far as we’re concerned, is the Cape Peninsula, a brilliant meeting of sea and land, and just to the north of the Cape, the salubrious Cape Winelands, and—two worlds side by side—one of the most cosmopolitan and beautiful cities on the planet, Cape Town, presided over by Table Mountain, which alone has far more plant species than the entire United Kingdom.

Home to the highest dunes on earth—famed Dune 7 rises like a 1,256-foot sand tsunami over the desert—Namibia is starkly gorgeous, a land of cathedral escarpments and haunting ravines, of desert-adapted elephants, baboons, leopards, and lions. Its Skeleton Coast is a theatrical meeting of sea and desert (the “Land God made in anger,” the local bushmen called it). Namibia is a world-unique place where “Muscles relax, the mind expands. The vastness enters into the skin like a shot. ‘Our’ time dissolves,” says writer Arianna Dagnino.

Larger than Texas, landlocked Zambia is bordered by eight countries, and its Lake Kariba is the world’s largest human-created lake (the Zambians like to call it “an undiscovered Riviera”). Kariba provides a nice rest for the Zambezi about 150 miles after that great river has its tumultuous adventure at Victoria Falls, safe to say the greatest cataract in our solar system.