Gloria Schwadron Has Been on Five Micato Safaris. Why?

Gloria Schwadron has been on safari with Micato five times since 2014. She’s on the books to join us for a sixth time this year and is already contemplating her seventh Micato journey after that.

It would be logical to conclude that we’re doing something right.

So we sat down with Gloria recently and asked her, why? Why does she join Micato on safari again and again and what precisely we are we doing right?

Micato Safaris: On a Micato Facebook post you commented on a scenic elephant photo, noting it resembled a picture on canvas you got for your birthday and that “the giver knew of my love of Africa.” Did you love Africa before travelling with Micato or develop a love of Africa after? And what about the continent itself so appeals to you?

Gloria Schwadron: Seven years ago my travel agent asked me if I liked animals and proposed two destinations – Africa and the Galapagos. But then as soon as she gave me the Micato Brochure… it’s not a brochure, it’s a book! I saw a photo of a safari vehicle in the middle of the bush surrounded by wildebeest and – forgive me – I tore it out and hung it up and said, “I want to do that.”

So my love for Africa came after I discovered Micato. In 2014 I took my daughter and son in law on safari, and that’s when it all started. I live in a suburb of St. Louis, where everything is the same day after day. And on safari, out in the bush, are all these animals and fantastic people. It was such an amazing experience. I fell in love with Africa then.

Micato: On another Facebook post where Micato announced it had landed in the #1 spot on the Travel+Leisure World’s Best Safari Outfitter List for a record-breaking 10th time, you commented “after going on five Micato Safaris, I wouldn’t go to Africa with anyone else.”

You have travelled with Micato Safaris five times already – the first time in 2014, #5 in summer 2021, and you are on the books with us again for safari #6 in summer 2022. And I guess my question – really, the big question of all my questions – is why? What about Micato keeps you coming back?

Gloria: The bottom line is that Micato really does treat you like family. They bend over backwards for you. When you need something or want to do something, it magically appears or magically happens. The people are so amazing and knowledgeable. And I always feel safe with Micato.

Another reason I do choose Micato again and again is because I get to help send kids to school.

Micato: If you think back to your first safari with us seven years ago, can you pinpoint the first time you had a moment or experience where you said to yourself, “Wow!”

Gloria: On our first game drive, our driver stopped where there was a mother rhino and baby, and we were close enough to hear them chew. And for some reason that did it, we just started crying, me, my daughter, and son in law. I just remember sitting there and watching these magnificent animals that I had never been close to. I had never been that close to a wild animal before.

Micato: Similarly, as you think back on that first safari and the ones you took after, do you recall particular moments where you said to yourself, “Gloria, you definitely need to come back!”? What are the safari experiences you have repeated or would like to repeat, and why?

Gloria: Driving in the Mara, this was when I went with [Micato Safari Director] Patrick, he said, “We are going to the Mara River and in 45 minutes you will see the migration.” And it happened.

And as I said, I have never felt unsafe or afraid with Micato. Watching the migration, I was in complete awe. You see little black dots in the distance and suddenly they come forward and become wildebeest. One starts forward and then one goes back, then one zebra goes forward and one goes back. It was overwhelming to see thousands and thousands of animals crossing this river – and then a crocodile came along and grabbed one of the wildebeest. The whole thing was extraordinary. Even just talking about the whole experience I get emotional.

I remember on another safari I was on an outdoor porch at one of the lodges facetiming with my daughter in St. Louis and some of the Maasai dancers snuck up behind me and started talking with her, too. It was so nice.

Micato: You said in one of your Facebook comments that you had travelled with us on The Hemingway Wing Safari and would be taking that safari again. And you suggested that was in part because of the tented camps on that journey. What about tented camps appeals to you? What do you think would surprise people the most about tented camp life?

Gloria: You’re all by yourself, out in the bush somewhere and you have your own bathroom that is amazing and hot water. And no solid walls in most of them – at one camp one whole wall was nothing but screens and a little monkey came up and was trying to get in, and it’s all open and you can hear hippos and see the river. There are no hard walls to deafen the wonderful sounds. I don’t care if those hippos wake me up – I want to hear them. At another camp I had two rock hyrax fighting on the roof of my tent at one point – that was hysterical.

Micato: You took Safari #5 with in June 2021, putting you in the company of Micato guests who trusted Micato with their safari during the pandemic. Perhaps the biggest vote of confidence you gave us is that after that safari you decided you were coming back in summer 2022. For people who might be on the fence about going on a safari right now, what would you say to them, based on your experiences?

Gloria: Do it! One, it’s not crowded. And I know Micato changed three of our lodges because the others were not ready. Micato was prepared. And everything was provided for you to make sure you were safe, including all the hand sanitizer, the masks. We felt completely safe. Micato made sure we were Covid tested before we went into a different country and before we came home. And again, there were no huge crowds to worry about. 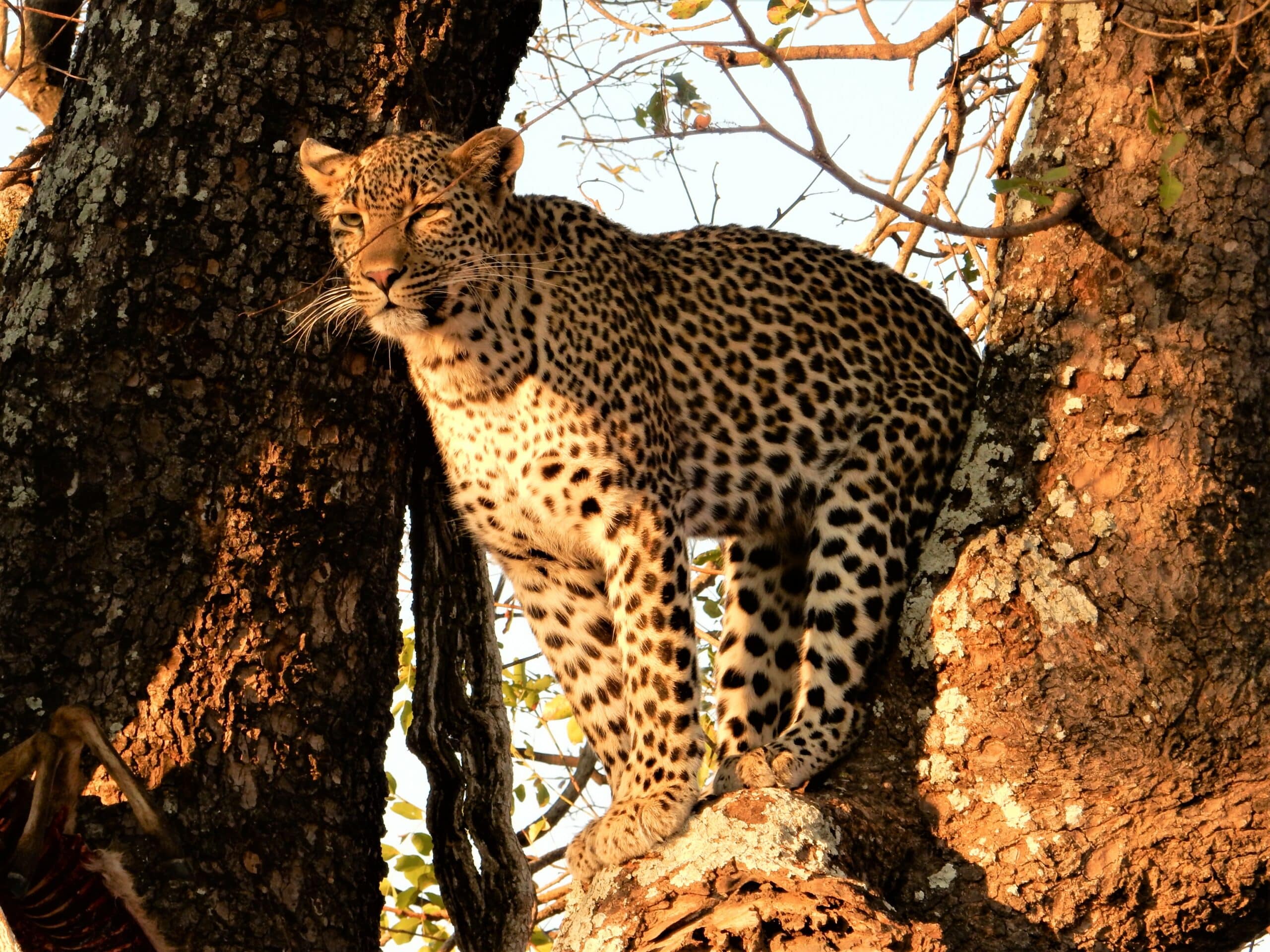 Micato: In your kind Google Review about us you wrote:

I have been kissed by giraffes, almost run over by a silverback Mountain Gorilla, swam in Devil’s Pool, fell in the Okavango River (thanks George Meyer for rescuing me), dined with Jane and Felix Pinto, walked with a Cheetah and danced with the Maasai all thanks to Micato. I will safari with Micato as long as I can climb in to the safari car.

Gloria: My favorite was climbing up into the Virunga Mountains in Rwanda and being inches from Agasha, a male silverback gorilla. He was sitting down. He got up and came straight at me and I got out of the way, of course. And I could have pet him (of course I didn’t!) being that close to that magnificent animal.

Seeing the migration was a close second, but this moment with Agasha was the best. 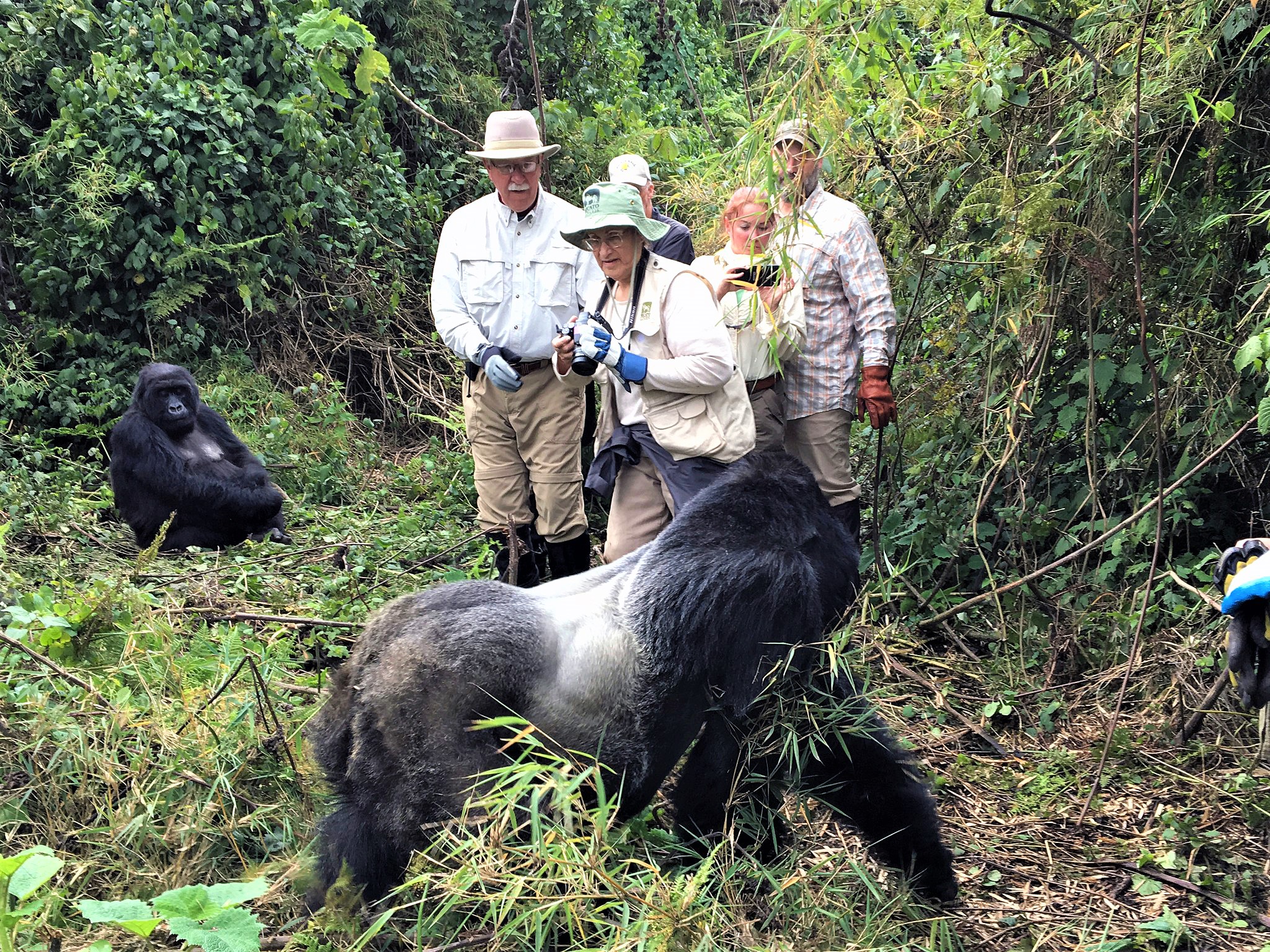 Micato: You’re the cool grandma who could take her grandkids anywhere, yet you keep taking them back to Africa – this summer with your grandson again and you also said you were hoping for safari #7 in 2023, again with your granddaughter. What more do you want them to experience? 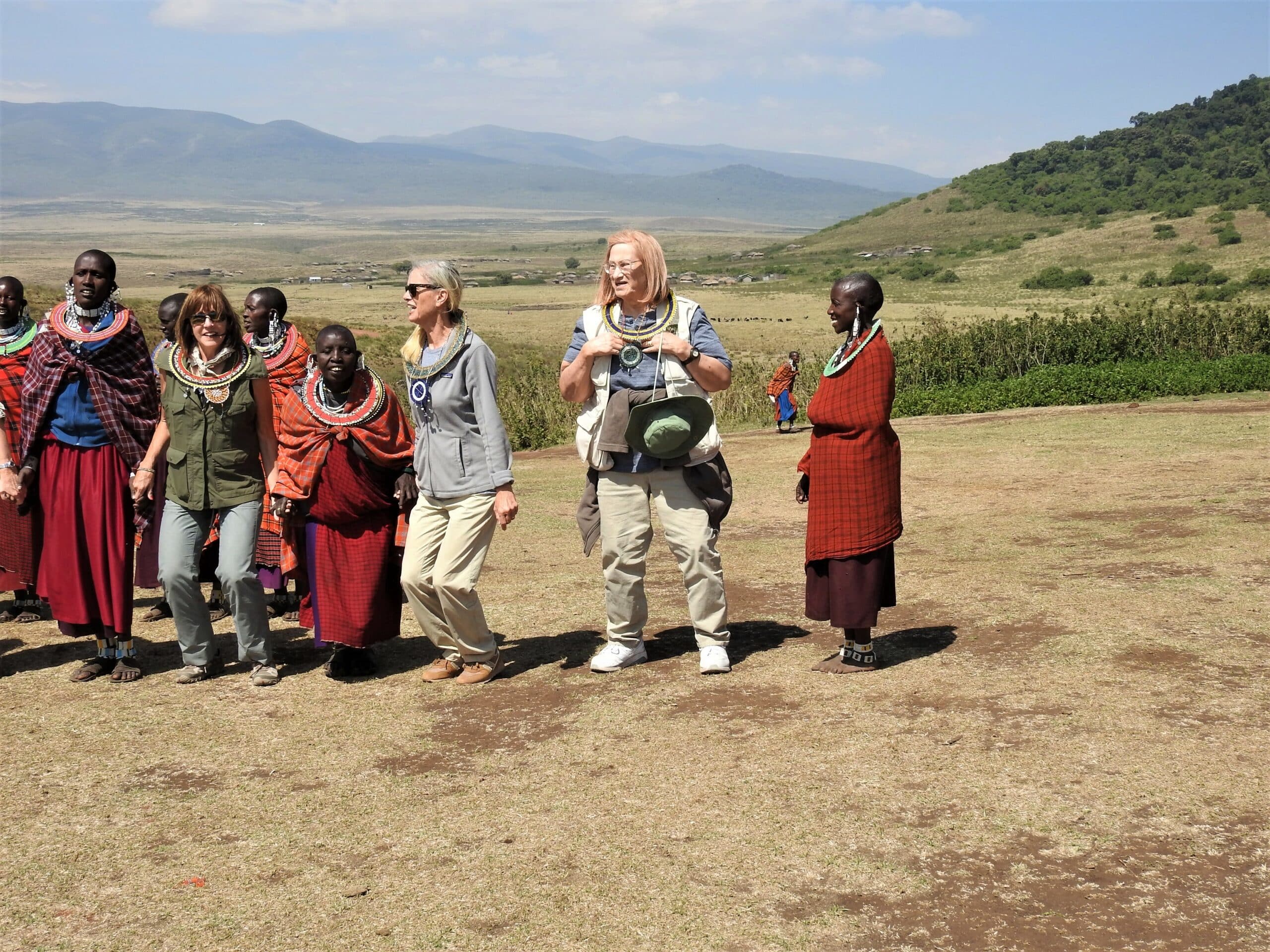 Gloria: I would love one of them to swim in Devil’s Pool. I’d love to would love to take them to see Victoria Falls, maybe ride a helicopter over Cape Town. I just want to show my grandson the migration. I want them to see the zebras and the monkeys just casually walking around. I want my grandson to see the Sheldrick Wildlife Trust; I want to see if I can get another private visit so he can play with the baby elephants – they have wet noses like dogs! I want them to experience this.

And I will take my grandchildren back on safari as long as they are willing to go. As for me, it’s not that I want to go back. I have to go back.

Up Next: Micato Teen Guest: My Family Safari Was the Experience of a Lifetime