Even the smallest elephant is too much for an arm’s length selfie. Yet U.S. Secretary of State John Kerry couldn’t resist trying when he met an elephant during his visit to the David Sheldrick Wildlife Trust in Kenya’s Nairobi National Park.

As Kerry clearly found, a visit here is both entertaining and educational, promising the ideal pre-safari primer. Home to dozens of infant elephants, this nursery-with-a-difference lets all visitors experience the magic of feeding time.

The Trust was founded by the late, great Dr. Dame Daphne Sheldrick, who passed away in April 2018 at the age of 93. In 1977, Daphne founded the Trust in memory of her husband David, founding warden of one of Africa’s largest parks, Tsavo East National Park in Kenya. It has become a pioneering elephant rescue and rehabilitation program, over time expanding its reach to protect the Black Rhino and other endangered species.

A flush of dust rises in a fine red cloud as the herd gambols toward us. Oltaiyoni and Olsekki chase each other back and forth. Young Mbegu faces up to Kauro, flaying her trunk playfully behind the flaps of his ears. The trumpet section comes alive with a high hoot.

What began as one long, orderly line of elephants quickly dissembles into a rollicking band of wrinkly hooligans. It’s Babar comes alive meets playtime for Elmer. It’s lunchtime for a herd of hungry baby elephants.

Since 1977, the Trust has successfully hand-raised more than 150 infant elephants in their Nairobi centre – most African elephants rescued are orphaned by poachers (Every 15 minutes an elephant is killed for its ivory). Elephants typically stay in the orphanage around six years before being released back into the wild.

This video will give you a bit more background.

These magnificent beings are the world’s largest living land animals, their 200 pound birthweight a mere wisp of their eventual 15,000 pound comeliness. Highly social and tactile, not only do they respond to their names but each has its own bunk and human keeper to sleep alongside them in their stable at night.

Their human “family” is encouraged to interact with and talk to the babies as they would their own: according to the Trust, elephants can read a person’s heart and mind. 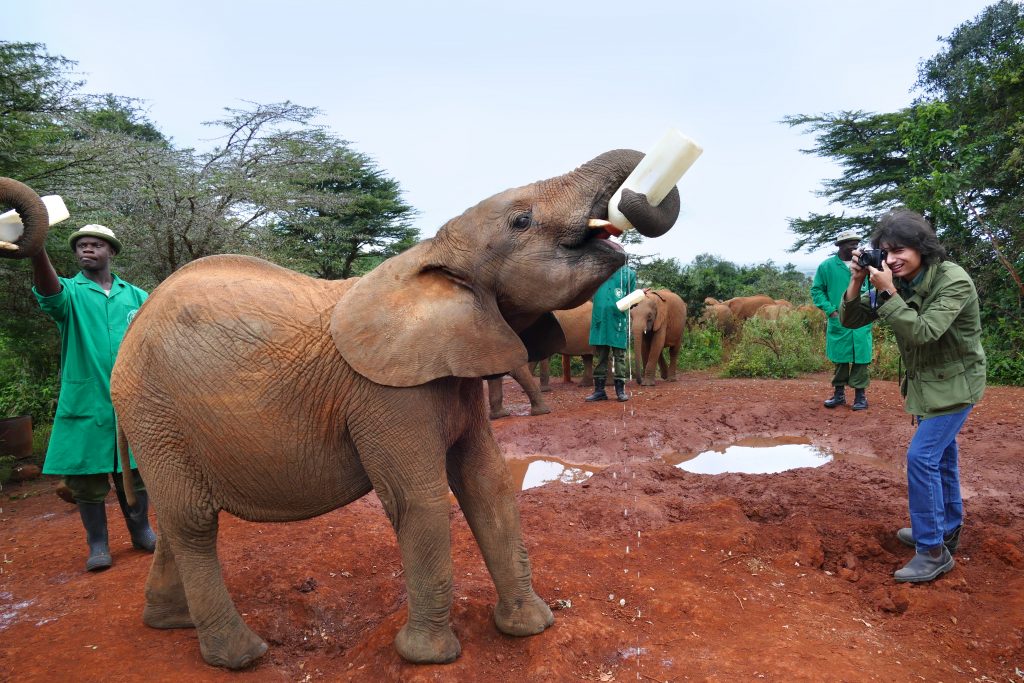 Once a day, visitors are welcomed to the orphanage to observe feeding time. This is just one of many meals: the youngest of the herd require bottle feeding no fewer than eight times per day.

Micato Bespoke Safari guests often “sponsor” and meet an elephant, a valued deed which earns them the opportunity for a memorable visit with their foster elephant during sponsors-only hours.

A private visit of the facility is another treat Micato guests may like to request. Similarly, visitors may choose to see the facility in Tsavo, the second phase of transition for the elephants.

For now, the great midday spectacle: bottle feeding a garden full of baby elephants the size of Smart cars. Trunks twine agilely round milk containers while younger ones are hand-fed the finger-length nipples. Either way, leathery babies of varying bulks guzzle down their five-litre allotment in fairly uniform times of around 30 seconds flat.

After lunch comes playtime. Kicking soccer balls, chewing on giant toothpicks, languishing under showers of cool earth shovelled onto their hides by the keepers.

The 18-month-old Arruba pauses at my feet, her long trunk swirling searchingly around my legs. Tusks smooth and white, dark lashes supermodel long. Her hide is soft as a giant Shar Pei puppy. For now, all safe and sound.

The David Sheldrick Wildlife Trust is on the edge of Nairobi, a short drive from downtown. DSWT baby elephants may be fostered for a minimum of $50 per year.

Interested in a custom visit to the David Sheldrick Wildlife Trust?

Plan your custom trip with Micato!

Up Next: Why I Love Nairobi