Giraffes have fascinated humans for millennia. With their soaring, elongated necks, roof-high legs, and geometric-patterned coats, the magnificent creatures have been depicted in African petroglyphs and cave paintings dating back as far as 8,000 BC. And as any safari traveller will tell you, these colossal herbivores still cast an enchanting spell. Glimpsing a wild giraffe towering over an acacia tree or cantering across the savannah—whether for the first or the twentieth time—is breathtaking.

No matter where your safari itinerary takes you, you’ll have opportunities to spot giraffes. So why not learn a little about these awe-inspiring animals, and deepen your appreciation of their unique magic?

As the tallest land mammals in the world—adults can reach 20 feet in height—giraffes enjoy certain advantages among African wildlife species. Their enormity means they’re much safer from predators than other plant-eaters of the savannah; only calves are really at risk from lions and hyenas. But since even newborn giraffes can weigh 200 pounds, and are protected from attackers by the vicious kicks of their mothers (and other adult females), the animals are free to spend most of their time placidly munching on their favourite food, acacia leaves.

Giraffes’ size, however, also comes with drawbacks. It requires up to 100 pounds of plant matter a day to fuel their monumental bulk, so especially during dry season and in arid areas, they must cover wide-ranging territory (up to 500 square miles) to find enough food. Other day-to-day activities are also made more difficult by their height. Just drinking water, for instance, requires giraffes to assume an uncomfortable spraddle position, with their straight, 6-foot-long legs splayed widely, to reach the surface of a river or pond. Laying down to rest is also a laborious production, requiring giraffes to kneel and fold their long legs beneath them. This, and the fact that they need very little sleep—less than an hour per day—is likely why they almost always doze (and even give birth!) standing up. 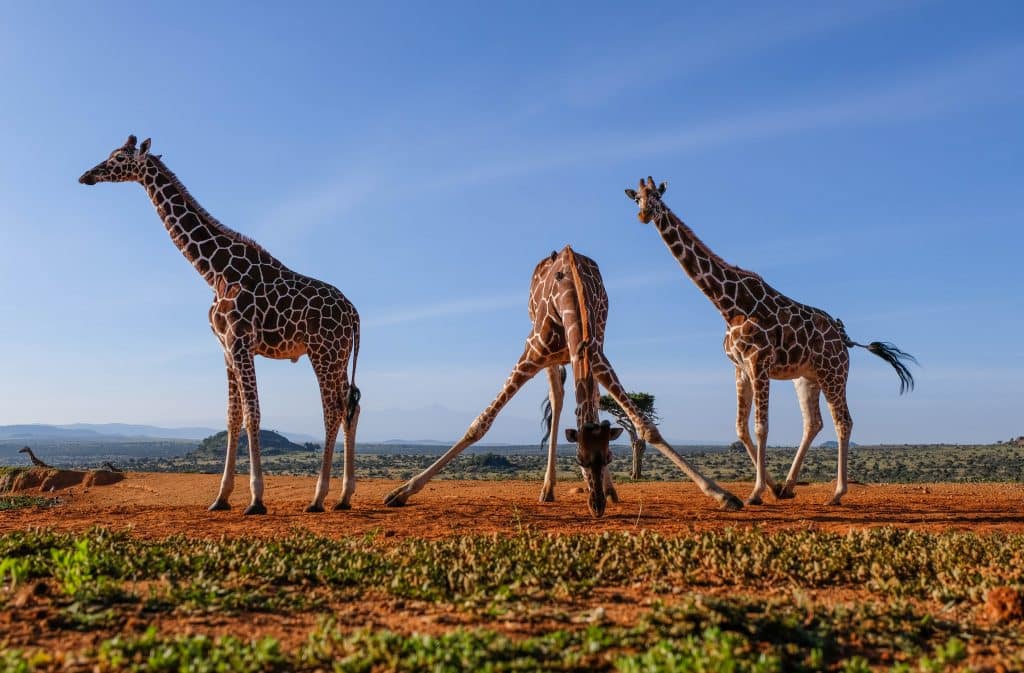 Though long studied, giraffes are just starting to reveal the secrets of their biology and behaviour to scientists. It was only in 2016, for example, that genetic researchers first discovered there are four distinct species of African giraffe—not just one, as had always been assumed. And while the differences between these species—the northern, southern, Maasai, and reticulated giraffe—at first seemed to be superficial, mainly involving home territory and variations in coat patterns, a more profound dichotomy has recently become clear: The different species don’t mate with one another. This new recognition has helped to more accurately gauge giraffe populations—and aid in their protection.

Plenty of other things about giraffes still have scientists guessing. The reasons for why their long necks evolved, for instance, is still being theorized about. Some biologists believe this adaptation allowed giraffes to literally outreach competing plant-eaters to access leaves in the highest tree branches. Others have surmised, though, that their massive necks developed in response to male giraffes’ “necking” battles—brutal dominance displays in which they whip their heads to bludgeon one another with their ossicones (tough horn-like protuberances atop their skulls). 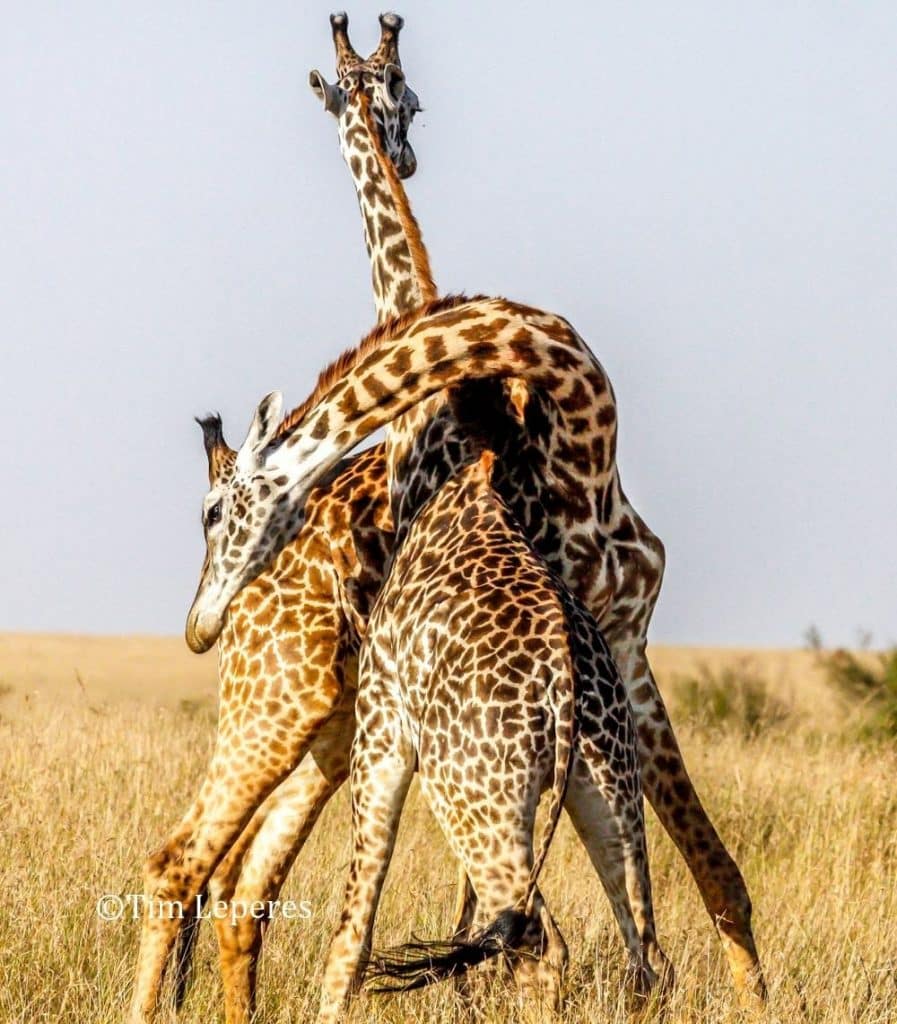 Giraffes’ beautiful rust-and-cream-coloured coat markings are also still raising questions. While it’s clear the mottled markings work to camouflage them (especially calves) in the shady tree groves where they forage, it’s thought that they also help regulate the giraffes’ body temperature. And some researchers now believe the coat patterns also serve identification purposes, too. Though every giraffe’s coat pattern is unique, like human fingerprints, with variations that are almost imperceptible to human eyes, giraffes may immediately spot these heritable differences and use them to recognize one another’s family lineage.

Where and When to Spot African Giraffes

Giraffes are a common sight in most safari destinations. You’ll spy them easily in preserves like South Africa’s Kruger National Park, Tanzania’s Serengeti National Park and Kenya’s Amboseli National Park. Since they have no set breeding season, whenever you travel, you’ll have a good chance of seeing babies. Plus, if you choose a Micato safari that takes you through Nairobi, you’ll get another special chance for up-close giraffe encounters, at the enchanting Giraffe Centre.

To plan your perfect safari itinerary—and see giraffes along with other dazzling African wildlife—start by talking with one of Micato’s safari experts.

Up Next: Africa's Gorgeous Night Skies