Why You Should Explore Namibia on Your Next Safari

A decade ago, many safari travellers who decided to visit Namibia only did so as an addendum to their itineraries in the neighbouring countries of South Africa and Botswana. In recent years, though, the singular beauty of Namibia’s stark desert landscapes, its remarkable desert-adapted wildlife species, and its unique cultural history have increasingly made the country a destination unto itself. Here’s more information about what makes Namibia so enticing—and why you should include it as part of your Micato safari.

It’s no exaggeration to say that Namibia is home to some of the most dazzlingly dramatic scenery on the African continent. The striking landforms here are due in part to the country’s extreme climate—it is the driest country in sub-Saharan Africa—and in part because its stark deserts abut nearly 1,000 miles of Atlantic coastline.

Many of the country’s most breathtaking landscapes are found where these two topographical features—desert and sea—converge. The Skeleton Coast, for example, a 300-mile-long stretch of Namibia’s northern shore, features landscapes of such harsh beauty that local Bushmen historically referred to it as “The Land God Made in Anger.” The seemingly endless, empty beaches, where the Atlantic Ocean pounds relentlessly, are punctuated here and there by the ghostly and picturesque “skeletons” of shipwrecks that have washed up here over decades (and also, lately, by new luxury lodgings which let you enjoy the rugged environs in comfort). 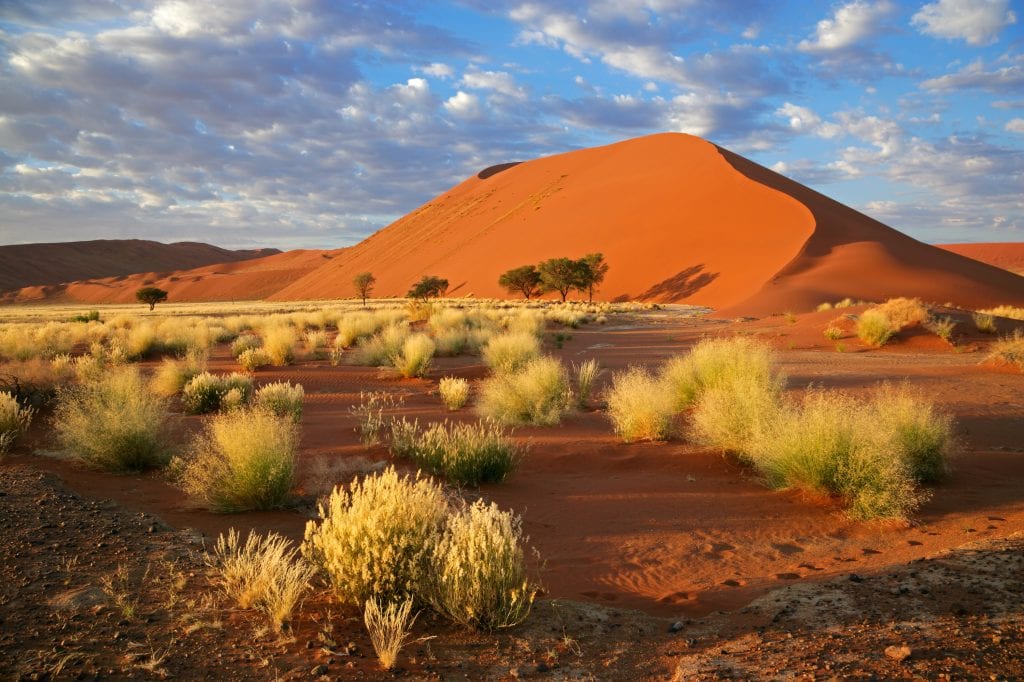 Further south in the sweeping expanse known as the Namib Desert (in the language of the local Damara people, “Namib” means “vast place”), photographers from all over the world flock to the Sossusvlei, a mountain range of towering sand dunes whose colouring shifts from burnt umber to flaming red depending on the angle of the sun. These dunes are some of the tallest in the world—the highest and most famous, called “Big Daddy,” tops more than 1,000 feet—and, when accompanied by your Micato guide, can be climbed (or marvelled at from above in a hot-air balloon ride).

Despite its sere and barren terroir, Namibia nevertheless hosts an extraordinary variety of wildlife species. But while many of these are the same that you might see in other, lusher African countries—lions, rhinos, elephants, cheetah, giraffe, zebra, and antelopes among them—there’s a critical difference between these animals and those you’ll find in the game parks of South Africa, Botswana, and Kenya. Even in Etosha National Park, the country’s leafiest preserve, Namibian animals are all exceptionally hardy, desert-adapted species, who have evolved to be able to withstand punishing heat, little water and shade, and scarce food resources; in other words, they’re some of the toughest creatures on the continent. They might not be as abundant as in the verdant Okavango Delta or the sheltered Ngorongoro Crater, but it is a unique thrill to encounter, say, a flock of ostrich startling into a run across a field of undulating red dunes; or a pride of coastal lions daringly hunting for seals in the Atlantic surf. 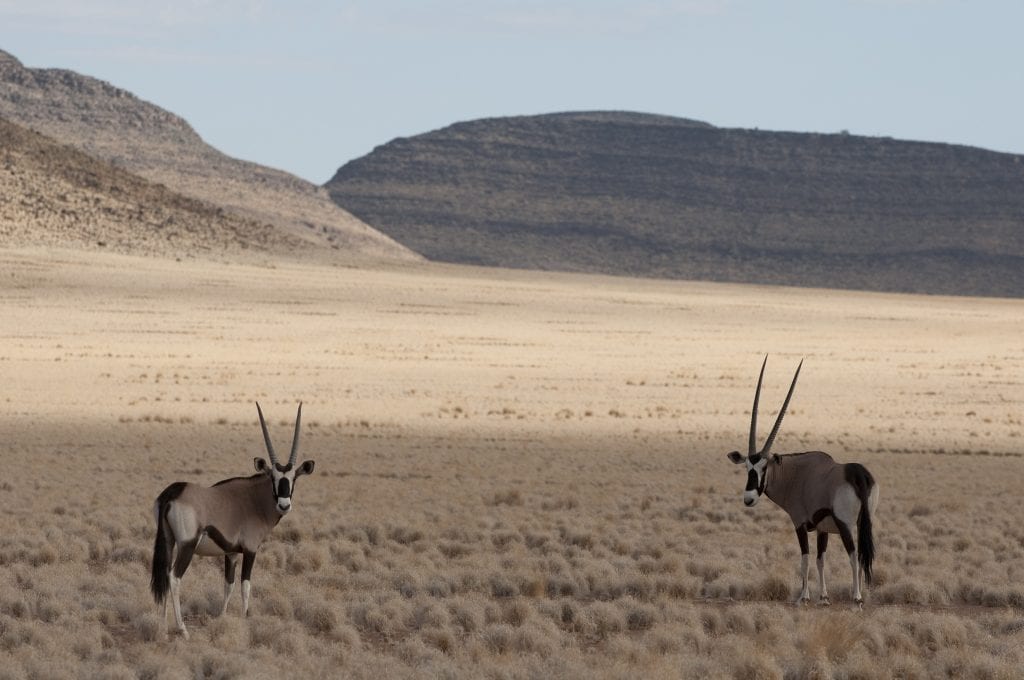 One of the most sparsely populated countries in the world (at last count, the country averages just eight people per square mile), Namibia is nevertheless a vibrant melting pot of ethnic and cultural traditions. Of the many proud indigenous groups that have lived here for centuries, some of the best known are the San (whose ancient ancestors created some of the continent’s most dazzling rock engravings, which can be seen today at Twyfelfontein); and the Herero, whose women are famous for having adopted—and adapted—the Victorian-style dress worn by European missionaries (full-length gowns with puffed sleeves, paired with ornate headdresses in the shape of cows’ horns). A subset of the Herero, the Himba, are equally renowned for their distinctive cosmetic rituals, which include covering their skin and long plaits of hair with a mixture of butterfat and ochre pigment called otjize. The paste is meant to both protect them from the sun, and to beautify. 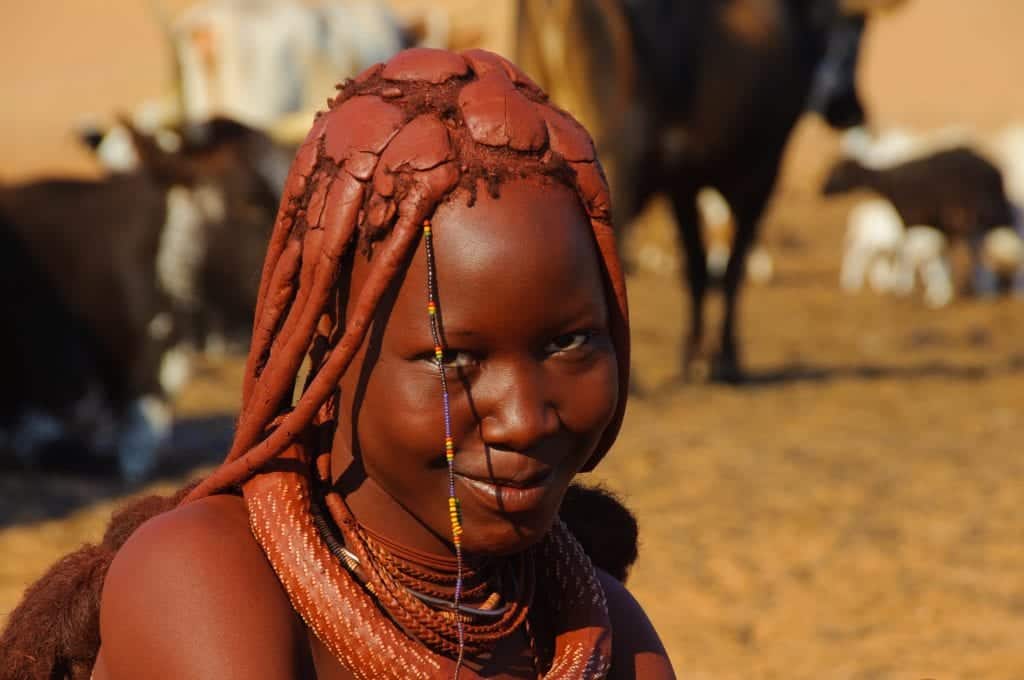 When the time is right, learn more about Namibia’s extraordinary natural and cultural attractions—and plan your travel itinerary there—by contacting one of Micato’s Safari Specialists.

Up Next: Gorillas of Rwanda: A Magical Safari Experience