One of the most extraordinary aspects of an African wildlife safari is the chance that it offers travellers to learn about the cultures of indigenous Africans. Many of these peoples, whose ancestors have lived on the continent for thousands of years, have a rich repository of folktales about the wild creatures who share their homeland. Some of these tales are parables, meant to convey moral messages (especially to children); others seek to explain the traits of wild animals that are otherwise mysterious. But instructive or not, stories like those below are marvelously entertaining. 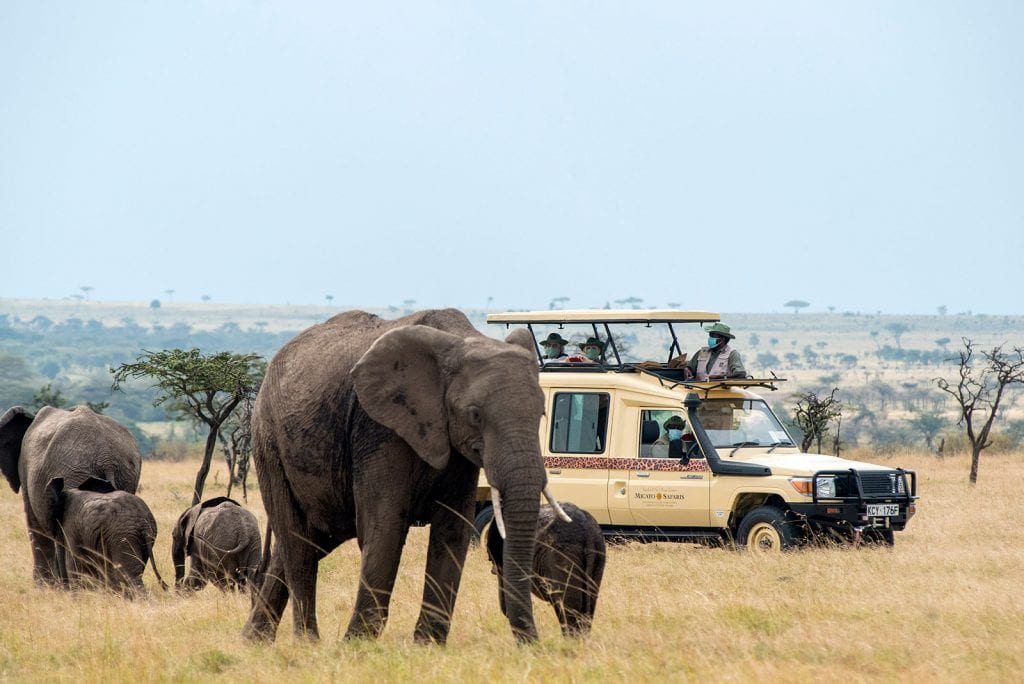 The Origin of the Elephant

According to this folktale told by the Samburu of north-central Kenya, the first elephant was created by a young girl who made the mistake of disobeying her father.

Long ago, a newly married girl was preparing to leave her family’s settlement, to live in another village with her new husband and his family. The girl was feeling melancholy about leaving home, but seeing this, her father took her aside.

“My daughter, you must not feel sad,” he told her. “You must embrace your new life as a wife. Do not dwell on the past—do not even let yourself glance back at your old home as you walk away.”

But as she left alongside her husband, the girl couldn’t help herself; she cast a last, wistful look back over her shoulder.

The all-seeing N’gai (God) noticed that the new bride had disregarded her father’s warning. Displeased, he decided to teach her a lesson. That night, as the girl slept in her new village next to her husband, she began to feel uncomfortable. Her body began to swell and change shape; she grew larger and larger, until the roof of the hut finally burst away to accommodate her bulk. There, under the starry sky, she stood, transformed into a gigantic, ponderous creature: the first elephant.

Today Samburu believe all the world’s elephants are descendants of this long-ago bride. That’s why they also believe they share the same lineage as elephants—and will bless the remains of any elephant they happen upon in the bush, as they would a departed family member. Clearly, they also subscribe to the idea that youths should respect their elders!

For the Kikuyu of central Kenya and Tanzania, a legend offers clever explanation for this typical hippo behavior.

In ancient times, the hippopotamus was a creature who lived in the grasslands and forests—but not in the water. A greedy eater, the hippo loved feasting on the savannah’s abundant foliage. As he grew fatter and fatter, though, his skin began to pull tight on his body, which made it burn more easily in the sun.

The more sunburned he became, the more the hippo longed for relief. Each day as he went to the river to drink, he found himself wishing he could submerge in the cold water, away from the hot rays of the sun. One day he could bear it no longer, and begged N’gai to have mercy on him.

“Please!” the hippo cried. “My skin is so painful. Won’t you allow me to me live in the cool, soothing water, like the crocodiles and otters?”

“If I let you into the water, you would surely eat all the fishes in my rivers and lakes,” N’gai replied. “Then there would be no fish, and no food for the other creatures who feed on them.”

Desperate, the hippo offered to strike a deal with N’gai.

“What if I promise to only eat grasses and plants along the waterside?” the hippo pleaded. “And let you look down my throat every day, so you’ll see I haven’t eaten a single fish?”
N’gai found this acceptable. But to this day, the Kikuyu say, hippos can still be seen opening their mouths yawningly wide toward the sky—to show N’gai they’ve kept their promise.

This story shared among the Zulu of South Africa offers a reason for the cheetah’s distinctive facial markings—and a reminder for humans to behave ethically.

Once, long ago, there was a hunter out looking in the bush for game. He hadn’t been out long, but because it was very hot—and the hunter had a lazy disposition—he quickly grew tired and decided to rest in the shade of a tree.

While sitting there, he spied a cheetah in the near distance, skillfully stalking a small herd of impala. As he watched, the cheetah stealthily drew close, then sprang from the tall grass and separated a single impala from the rest of the group. With her enormous speed, it took her just moments to chase down her prey and kill it—and then drag it to a clearing so her three hungry cubs could feed on it.

The hunter felt envious. Why couldn’t he provide for his family as easily as the mother cheetah did for hers? But then a devious idea arose in his mind: Why not steal one of the cheetah cubs, raise it and use it to hunt for him?

That evening, when the mother cheetah had gone to drink at a waterhole, the hunter ambushed the cubs. Unable to decide which to take with him, he finally grabbed all three and hurried them back to his village.

When the mother cheetah returned to discover her cubs gone, she cried so bitterly that her tears left dark stains on her cheeks. An old man, an elder from the hunter’s village, heard her weeping as he passed by, and asked her what had happened. Once he learned what the hunter had done, the old man expelled him from the village—not only for dishonoring the mother cheetah, but also for dishonoring the community with his shameless behavior. Though the cheetah cubs were returned to their mother, the stains from her tears remained, as a reminder for other hunters to always be fair-minded.

Interested in learning more African folktales—and meeting the groups that have shared them for generations? Speak to one of our safari experts to start planning your magical safari.

Up Next: Love Letter to Africa (Video)