Luckily for safari travellers, some of the most marvellous African rock art sites aren’t too far from the continent’s best-known game parks and wildlife preserves. But even those that require a bit of a journey—like the three below—are well worth visiting before, after, or as part of your Micato safari itinerary. 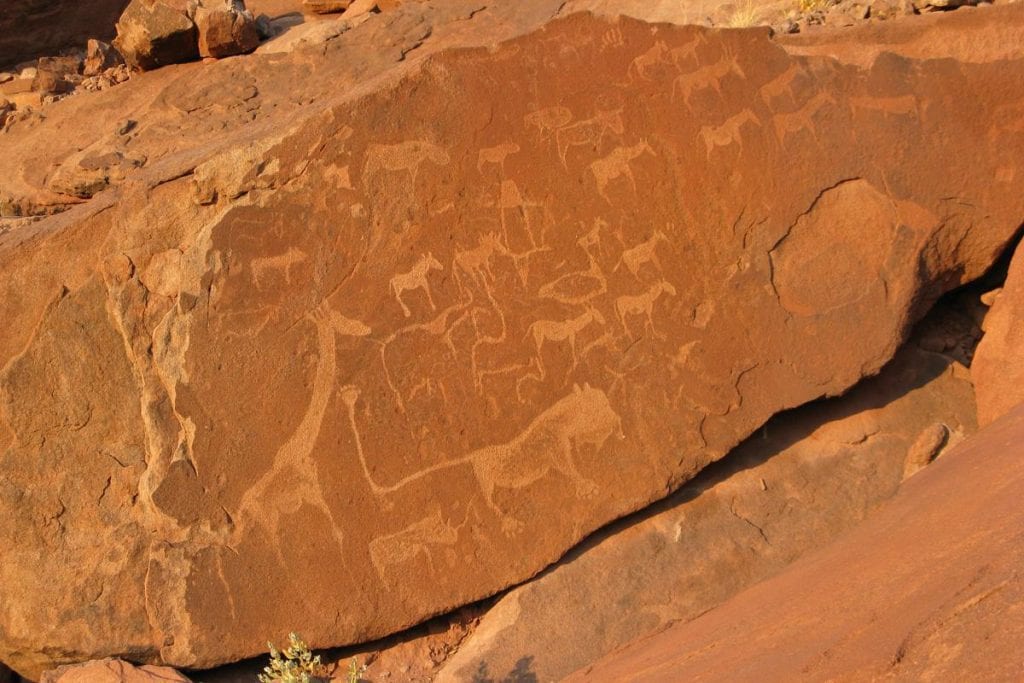 In Kunene, a desert region outside the southern reaches of Skeleton Coast National Park, this extraordinary outdoor gallery of sandstone engravings is Namibia’s first and only UNESCO World Heritage site. Occupying the slopes and rock faces flanking what was once a flowing ancient spring, the series of petroglyphs—estimated to have been created by the San people, ancient hunter-gatherers, between 2,000 and 10,000 years ago—detail the remarkable profusion of wildlife that once gathered here. Along with finely etched figures and footprints of zebras, giraffe, lions, antelope, and rhino (rarely found in the area today), one especially intriguing engraving appears to depict a seal; even in prehistoric times, the ocean was more than 50 miles away.

About two hours south of Tarangire National Park by road, Tanzania’s central Kondoa region is home to such an abundance of significant rock art that it was declared a UNESCO World Heritage site in 2006. Though the area comprises about 900 square miles and hundreds of different sites (including rock shelters, caves and cliff faces), some of the most accessible—and wondrous—are the paintings found in a series of shelters around the village of Kolo. First discovered by Mary Leakey in the 1950s, these red-pigmented images portray elongated human figures, some wearing elaborate feathery headdresses, as well as animals like giraffe, antelope, elephants, and wildebeest. They are estimated to have been painted some 2,000 years ago by ancient Sandawe people, whose descendants still occupy the region, and who sometimes use the sites for spiritual ceremonies.

A few hours west of Durban, in the foothills of the Drakensberg Mountains of South Africa, this narrow sandstone shelter contains some of the continent’s most spectacular paintings created by early San people. The walls here are blanketed with astonishingly vibrant images in shades of red, brown and white, depicting eland antelope, human figures, and—in one particularly fascinating sequence—what appears to be a shamanic ritual through which a person in a trance state joins with, or transforms into, a dying eland. On some of these paintings, the brush strokes are still visible, though they were created roughly 3,000 years ago. The insight they have provided to anthropologists studying the San has led to them being called “The Rosetta Stone” of rock art.

To learn more about these African rock art sites—as well as many other anthropological gems you can incorporate into your safari itinerary—speak with one of Micato Safaris’ expert Safari Planners.

Up Next: The Ultimate Luxury Family Safari