Fierce Mamas of the Big 5 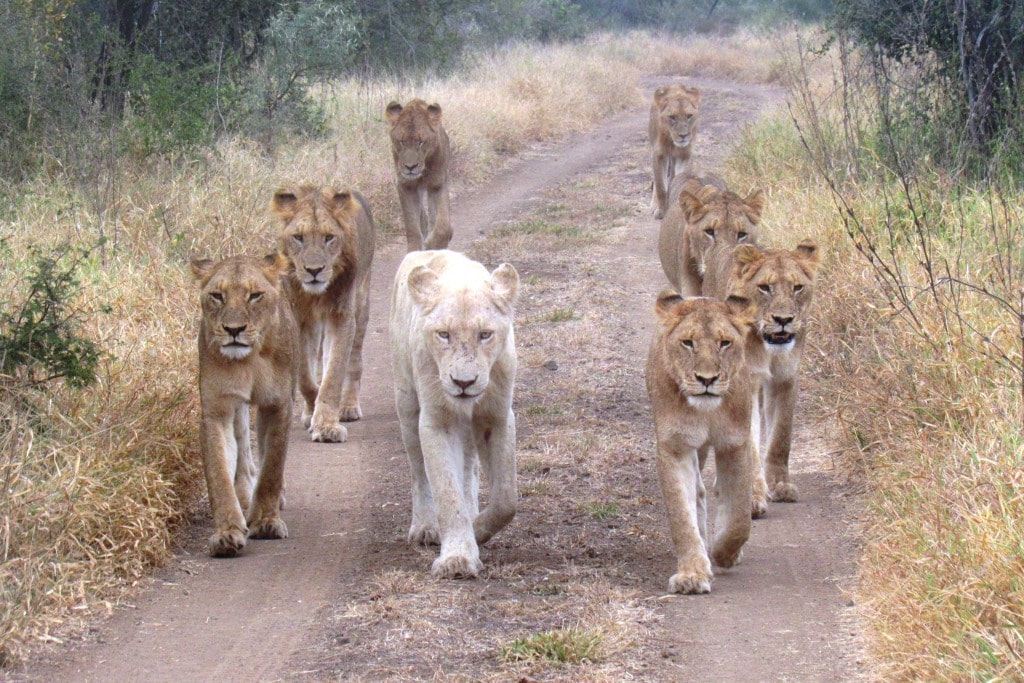 Somewhere today on Africa’s grassy plains a lioness is giving her cubs dinner, most likely her share of an antelope that she and her sisters from neighboring prides took down. Also joining for dinner is her lion king of a husband who had no part in the hunt.

But then he seldom does. Yet he will eat first, before she and her cubs do.

Because the animal kingdom, it is what it is.

If this fact about lions makes sense, like you’ve heard it before, well, you probably have: lionesses, along with the other mamas of Africa’s Big 5 —  leopards, Cape Buffalo, elephants, and black rhinos, hold the family together. In addition to all of the childbirth, they do much of the parenting and most of the day-to-day work, even if dad is home without a lot to do.

We’ll pause here so the moms out there can slowly nod their heads and the dads can do that thing they do when they suddenly look busy.

Despite not getting a lot of male support at home, the fierce mamas of the Big 5 prevail, surviving and in most cases thriving, saying with one voice, as the lioness might – and you knew this was coming – I am woman, hear me roar.

With that, enjoy these additional facts about some of the fiercest and most sought-after animals in Africa. 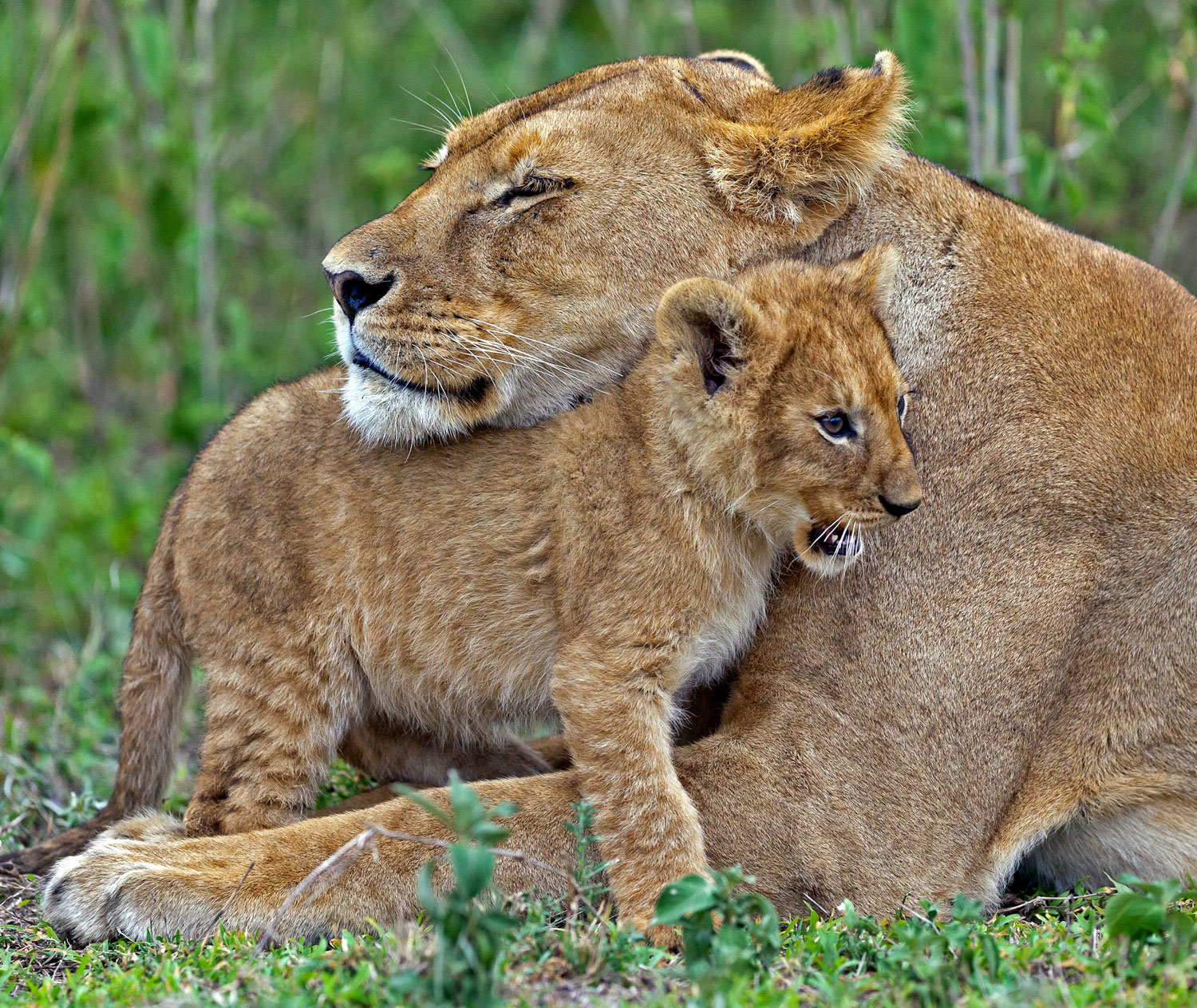 The lowdown: A lioness will give birth to a litter of two to four cubs after a pregnancy lasting 3 ½ to 4 months and, if she wishes, she is somehow able to synchronize her childbirth with that of other lionesses so that the ladies can help each other raise their cubs.

And, according to the South African National Biodiversity Institute (SANBI):

Lionesses engage in allosuckling, which is the suckling of any cub by any lactating female. Mostly, each female suckles her own cubs, but the mutual suckling and communal care of any cub of the pride by any female reduces the chances of mortality for all cubs.

Favourite safaris for spotting lions: The Micato Grand Safari is an excellent trek on which to see lions, though lion mamas and their sleepy mates may be found on grassy plains all over Africa. 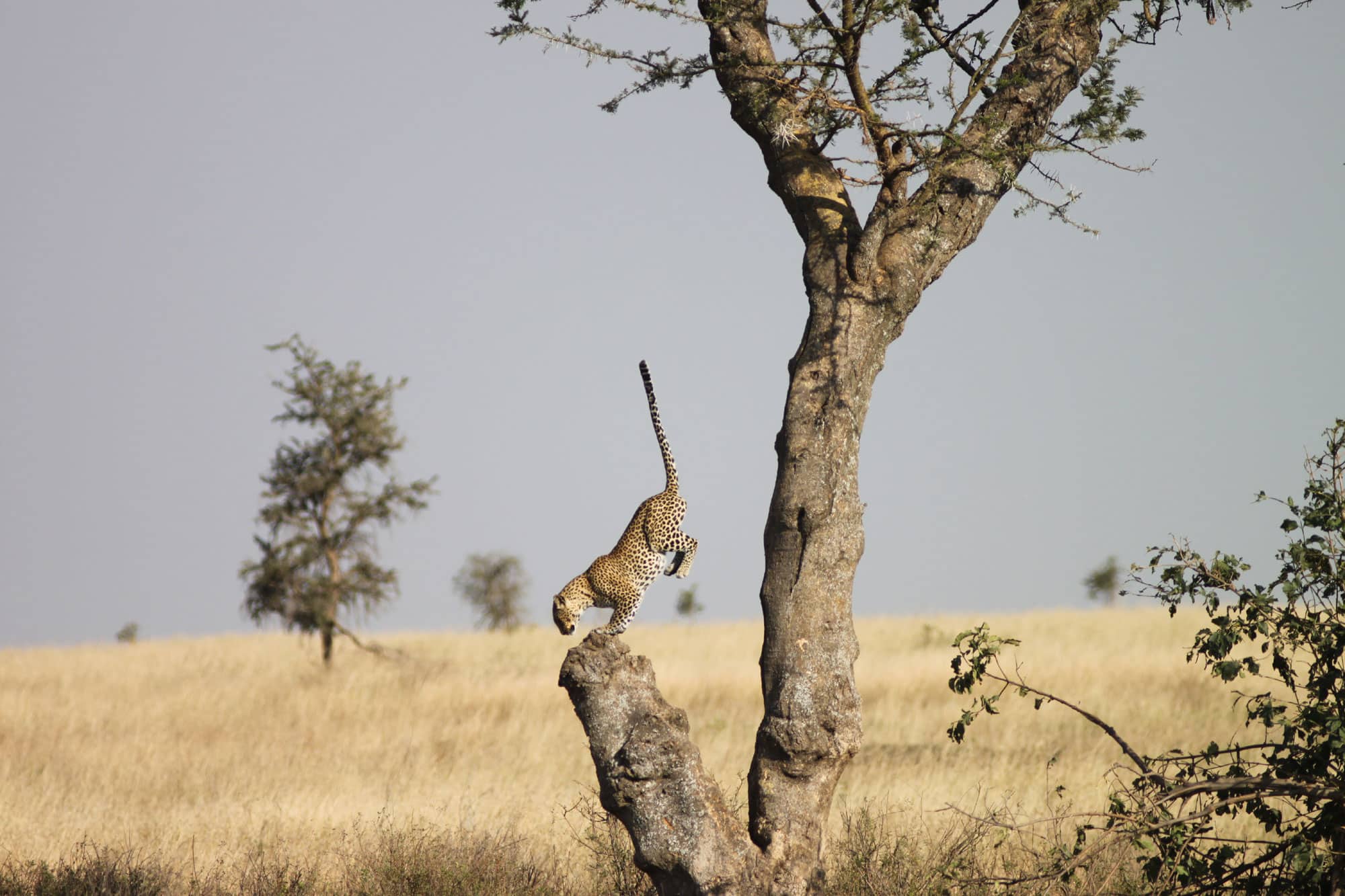 The lowdown: After a pregnancy of 3 to 3 ½ months a leopard will find herself with a litter of one to three cubs, who are born blind and depend on mom for the next week or so until their eyes open. And for the next year to 18 months the kiddies seldom leave mama’s side, and may linger beyond, as the mortality rate for wandering leopard cubs can be quite high.

More fun facts: Lady leopards are expert at surviving in both arid and forested areas in Africa and India and often live apart from their mates and other male counterparts. Male leopards have a home range between 12 and 30 square miles, and mama leopards have no qualms about setting up their homestead on land that overlaps a male’s territory —as long as he doesn’t crowd her.

Favourite safaris for spotting leopards: The best place to spot a leopard is wherever a Micato African safari vehicle happens to be! Micato Safari Directors and Driver-Guides are expert at finding leopards, female and male. Though it bears reminding that leopards are the most elusive of the Big 5, so spying one, even with the help of an expert, is not assured. More specifically, The Stanley Wing Safari is an especially great expedition for seeking out leopards and creatures of all stripes, and spots. 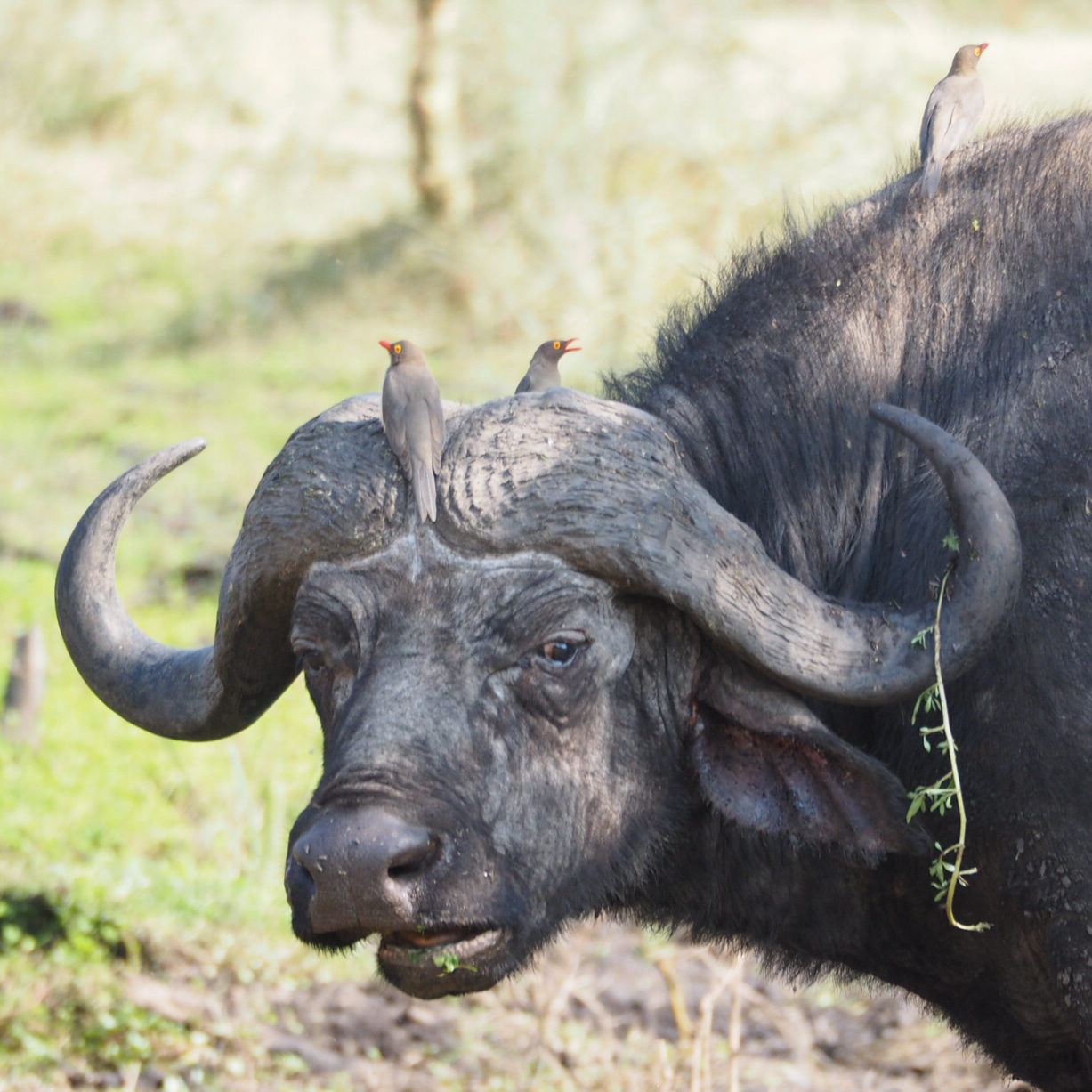 The lowdown: Following an 11-month gestation period, a mama Cape buffalo will give birth to one calf, often during the rainy season, though buffalo breed throughout the year. Mama buffalo and their daughters tend to stick together for a long time, whereas their sons gradually distance themselves, growing up to be men who in turn distance themselves from their mates. The male Cape buffalo, in fact, will often join a bachelor herd, taking a little time out during the rainy season to try to make a love connection with one of the ladies before returning to his boys.

More fun facts: A herd or gang of buffalo are also known as an obstinacy because let’s face it, they’re the most stubborn and ill-tempered of the Big 5. That’s maybe just as well for mama, as a reputation for being extra fierce doesn’t hurt if she’s charged with most of the babysitting and other parenting. And if a predator picks a fight with mama – the entire herd, including the men, if they’re around – will rise up to defend her.

Favourite safaris for spotting Cape buffalo: Cape mamas and dudes are everywhere in East and Southern Africa: Chyulu Hills, the Serengeti, Samburu, Etosha, Okavango Delta… wherever there’s grass to eat and wide-open plains in which to play, though we’ll give The Stanley Wing Safari another hat tip, as this journey offers solid opportunities for spotting Cape Buffalo, who can usually be found near water.

The lowdown: A mama elephant will typically give birth to a single calf – though it’s possible for her to be blessed with twins – after a gestation period of 22 months. Like the Cape buffalo, elephant daughters will stay by mom’s side for most of their lives, while the boys will strike out to eventually form new herds. While the men are off rambling the savannahs, the family will almost always be led by an older mama, appropriately known as the matriarch. “The reason why the oldest female is in charge is simple – she has the most knowledge and a lifetime of experience,” SANBI notes, “and thus is in the best position to make decisions for the herd especially in times of drought.”

More fun facts: “Because male [and female elephants] dwell in separate social worlds,” notes PBS.org, “different methods of communication exist for both. Researchers have found that females have the most extensive vocal repertoire. Seventy percent of all known calls are made by adult females, juveniles and calves, leaving only thirty percent for adult males.” Also: Elephants, both the ladies and men, are amazingly fast for their size as well as quite smart: When faced with something or someone that does not intend them harm, they are gentle and peaceful. 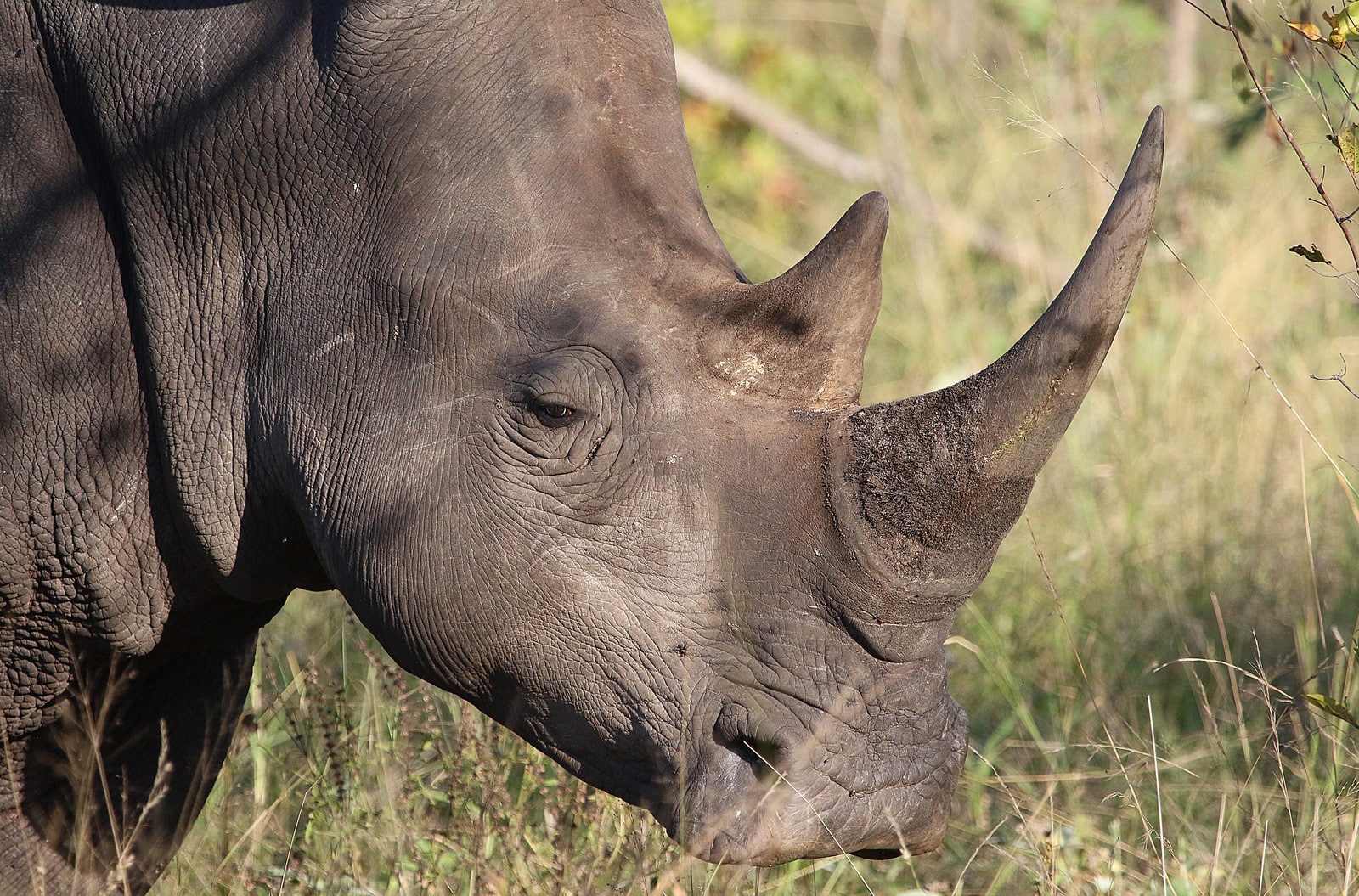 The lowdown: The black rhino mama, after a 15-month pregnancy, will birth one calf, who will depend on her almost exclusively for about three years. Once junior is big enough not to be chomped by a crocodile, wild dog, big cat, or hyena, he will leave mom’s shadow, at which point the only predators that pose a major threat to him are us humans.

More fun facts: If a buffalo is charging at top speed she can be nearly as fast as a leopard. Likewise she can match a leopard’s elusiveness if she does not care to be seen. So if you do manage to get a snapshot of a rhino running or hiding, consider yourself a lucky safari goer.

Favourite safaris for spotting rhinos:  Black rhino live in Tanzania, parts of Kenya, Namibia, Botswana and regions of South Africa. While that sounds like a big range, there are only around 5,400 members of this critically endangered species left in the world, according to the World Wildlife Fund. You’ll have good opportunities to look for black rhino around the Ngorongoro Crater on the Tanzania Spectacular or perhaps on a Custom Micato safari that lingers in the Lewa Wildlife Conservancy.

See these fierce mamas yourself!

Up Next: Luxury Safari Camps Where You Can Help Rewild Endangered Species