UNESCO World Heritage Sites You Can Visit with Micato

UNESCO World Heritage Sites are areas of land granted legal protection by UNESCO, an international convention, for having major cultural, scientific, or historical significance. In short, they are some of the most spectacular places on earth. As of June 2020, there are 1,121 UNESCO World Heritage Sites around the globe. Here at Micato, our itineraries include visits to four of them. Fancy a peek as to which ones you can explore while on a private safari in Africa? Allow us to introduce you.

Situated in the Crater Highlands of Tanzania, the Ngorongoro Conservation Area is a protected area named after the Ngorongoro Crater. The crater itself is an immense marvel, occupying an area of roughly 75 Central Parks combined and serves as the main attraction of the conservation area. Considering the supremely lush environment within the inactive caldera, many animals call the Ngorongoro Crater home. Roughly 30,000 of them, in fact. You’ll find a lot of Africa’s star players while touring the crater too. Animals to keep an eye out for include but are not limited to, the black rhinoceros, Cape buffalo, hippos, zebras, cheetahs, and lions. The Ngorongoro Crater provides some of the best game viewing Africa has to offer, bar none. 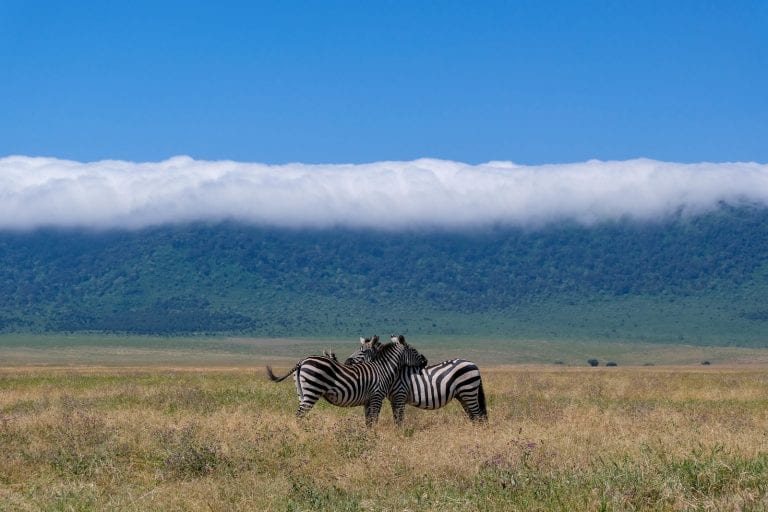 We partner with several lodges within the crater that make a great base camp and under the guidance of your trusty Micato Safari Director, you’ll be able to take your time discovering everything the crater has to offer. If the Ngorongoro Crater is on your safari destination list, then trust us to care for you in style.

Considered one of the world’s largest (and greatest) waterfalls,  Victoria Falls easily landed itself on UNESCO’s list. Located on the Zambezi River on the border between Zimbabwe and Zambia, the Falls stand nearly 360 feet tall and roughly 5,600 feet wide. “Majestic” is an understatement and we often find guests content to simply gaze at the falls in awe. While the Falls are obviously the biggest highlight here, you’ll also find this UNESCO Heritage site is home to several species of plants and animals. In the river area above Victoria Falls, you’ll find an abundant number of hippos and crocodiles, while the gorges feature the likes of lizards, honeybadgers, clawless otters, and klipspringers. Several birds of prey species frequent the area too, including black eagles and peregrine falcons. There are plenty of activities to partake in while visiting the Victoria Falls too, like hopping on a helicopter for a flight over the Falls or taking a boat ride along the Zambezi above the Falls. 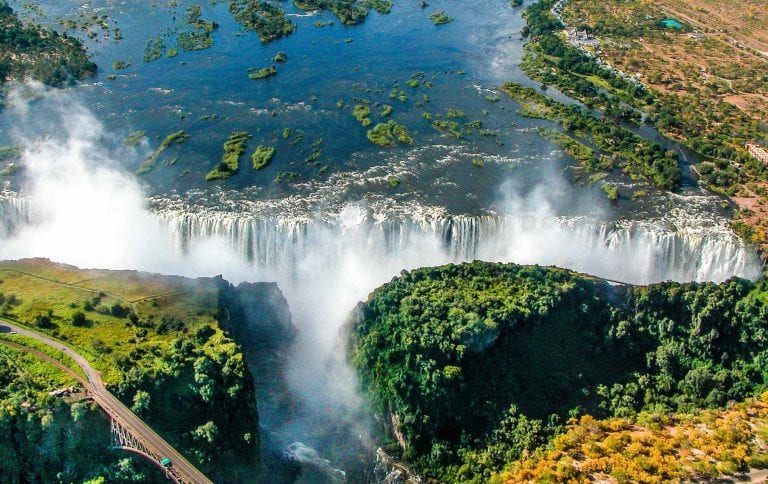 While you may craft your private African safari however you wish, we often find our guests like to take a couple of days to appreciate the Falls. If you want to stick around the area for a bit, check out the Royal Livingstone Hotel or the Thorntree River Lodge. Please, come stay awhile. After all, there’s nothing quite like watching an entire lake’s worth of water plunging down 360 feet every minute of every day.

The Serengeti is synonymous with a lot of people’s knowledge of Africa, and for good reason. This Tanzanian national park and UNESCO World Heritage Site is the teeming with animals and serves as an important stop on the great migration, which is the world’s greatest wildlife spectacle. Ranging 5,700 square miles of grass plains, woodlands, savannah, and riverine forest, the Serengeti National Park houses more than three million large mammals, including the Big Five, and over 60 large mammal species. While out on game drives with your Micato Safari Director you are sure to encounter wildebeest, kudu, nearly infinite gazelle, giraffes, elands, zebras, lions and so many more. Honestly, name a traditional African mammal and you’ll likely find it roaming about the Serengeti. We find our guests on private safari are often giddy with excitement at the sheer number of wildlife encounters they have in the Serengeti while kicking back in their safari vehicles. It’s truly a remarkable place. 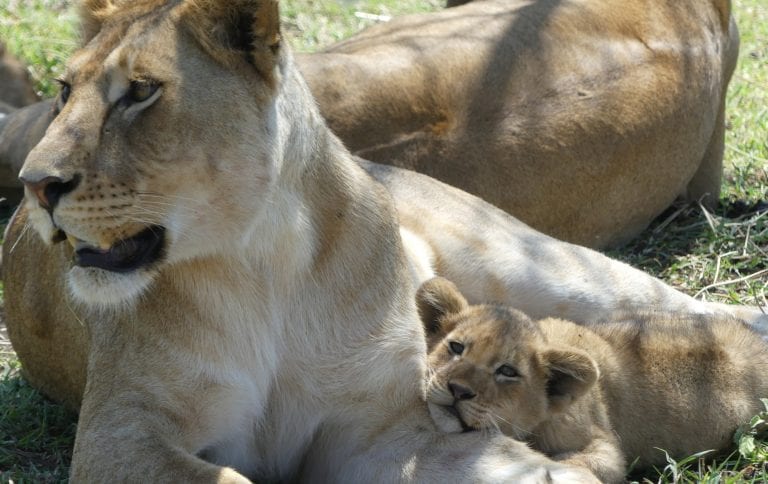 If you’re looking to spend a lot of time exploring Serengeti National Park, consider staying at the Serengeti Migration Camp, the Four Seasons Serengeti, or Namiri Plains If you’re looking for an amazing experience with large numbers of African wildlife staples, this UNESCO World Heritage site is the perfect place to visit on safari.

The Okavango Delta is a dreamy place. While the description “swampy inland delta” doesn’t sound all that magical, trust us and UNESCO when we say it’s magnificent. The Okavango Delta is located in Botswana and is a fan-shaped network of wetlands that formed where the Okavango River meets the Kalahari Desert. None of the water in the delta reaches the ocean but some water does drain into Lake Ngami. This wetland environment is home to an astounding number of species. To be more precise, the Delta contains 1,500 species of plant, 530 bird species, 160 mammal species, 35 species of amphibian, and 155 species of reptile. The Serengeti may have more traditional African animals on display but the Okavango Delta is where you go to feel truly out of this world. For instance, jumping in a mokoro for a unique game drive along the delta is an unmatched experience. 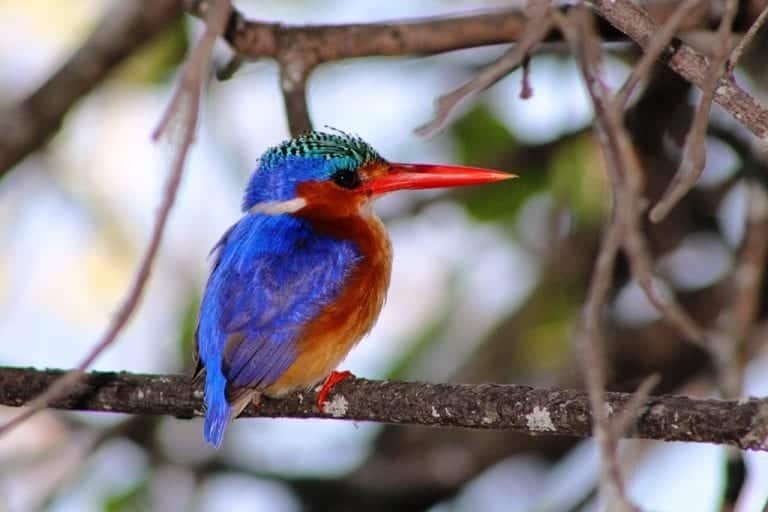 Considering that, we sincerely recommend taking your time in the Okavango Delta. Some luxurious options to stay at on private safari include Abu Camp, Xugana Island Lodge, or Vumbura Plains Camp. It’s genuinely difficult to capture the Delta without experiencing it for yourself. But if we had to use one word, we’d choose “miraculous”.

It’s not every day you get to visit a UNESCO World Heritage Site on a private African safari, so we always suggest guests try to incorporate at least one into their itineraries. Because, at the end of the day, visiting any or all of these cherished sites will leave you with a greater appreciation for the natural world. These sites are also incredibly different from one another. With Serengeti National Park and the Ngorongoro Conservation Area located in East Africa, and the Victoria Falls and the Okavango Delta located in Southern Africa, combining all four locations would make for a spectacular private safari. Come discover the wonder of a UNESCO World Heritage Site with Micato!

Up Next: Eco-Friendly Safari Lodges in East Africa