The home base for India’s entertainment, financial, and business industries—as well as some 20 million residents—the west-coastal metropolis of Mumbai is one of the world’s most exciting and populous cities. The attractions here range from ancient sacred sites to glitteringly modern arts districts; and like the city’s buildings, thoroughfares and inhabitants, they’re jam-packed. But whether your itinerary includes an extended or brief sojourn here, there are sights that every traveller to Mumbai (which locals still call by its previous name, Bombay) should consider visiting. Here are a few to discuss with your Micato planner.

Formerly known as Victoria Terminus, this spectacular, UNESCO Heritage-listed railway station is one of Mumbai’s most dazzling architectural gems—and a structural nod to India’s colonial era. Completed in 1887, during the reign of Queen Victoria, the station encompasses more than seven acres. Its grand expanse—including a massive central dome, turrets and steeples festooned with intricately carved gargoyles, and soaring vaulted interior arches—incorporates elements of both Gothic and traditional Indian-palace architecture. But it’s more than just an aesthetic representation of the meeting of two cultures; it’s also a bustling working terminal, used by more than 3 million rail commuters every day.

This southern-Mumbai neighbourhood with its cobblestoned streets and hodgepodge of historic and contemporary buildings is the city’s cultural hotspot. It’s home to the city’s most important art museums—including the Chhatrapati Shivaji Maharaj Vastu Sangrahalaya (with its vast collection of ancient and antique artifacts), The National Gallery of Modern Art, and The Institute of Contemporary Indian Art. The pedestrian-friendly avenues are also chockablock with independent galleries, trendy fashion boutiques, and chic restaurants and nightspots. Additionally, since 1999, the district has played host to the Kala Ghoda Arts Festival, a nine-day celebration of visual and performing arts, literature, and food that draws enthusiasts from all over the world.

A popular evening ritual for many Mumbaikars is to stroll this 2.2-mile-long seaside promenade, which extends between Nariman Point (in the south) and Chowpatty Beach (to the north). The walk takes about an hour one-way; and though the route parallels the traffic-choked Netaji Subhash Chandra Bose Road, and you’ll share the palm-studded walkway with throngs of local families, it nevertheless manages to feel like a break from the city’s congestion. You can spot the splendid (and Miami-esque) Art Deco buildings that characterize the upscale neighborhood of Malabar Hill; taste numerous varieties of chaat sold by the scores of street-food vendors; and, after dark, see why the lights illuminating the crescent-shaped route have given it the nickname “The Queen’s Necklace.” 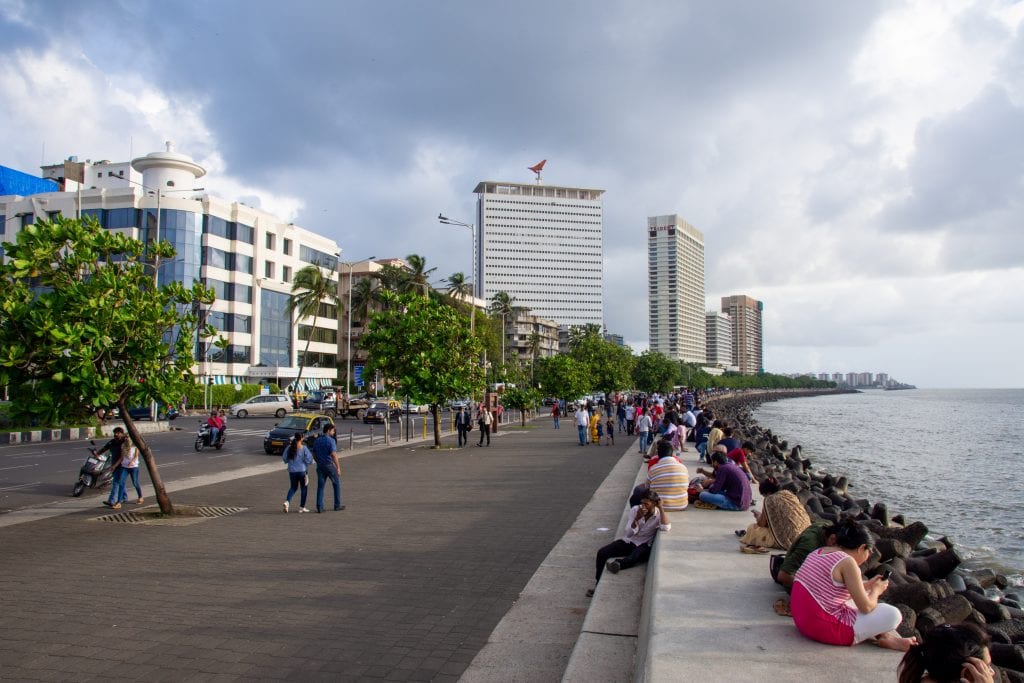 An hour-long boat ride across Mumbai Harbour from the city’s iconic Gateway of India (a grand stone archway set on the city’s western waterfront) lies Elephanta Island—or Gharapuri, meaning “the city of caves.” True to its name, the small isle contains, among a wealth of other ancient archaeological sites, a series of dazzling rock-cave temples honouring the Hindu god Shiva, which date back to approximately the 6th century AD. Carved out of the island’s solid basalt, the caves house extraordinary pillared chambers, sculptures, and detailed bas reliefs depicting Hindu legends and iconography. Though some features of the cave temples have sadly degraded over time (despite their UNESCO Heritage protection), many are still marvellous—most particularly a 20-foot-high carved Trimurti (three-faced Shiva) which adorns the largest main cave.

To learn more about these must-see Mumbai sights—and incorporate them into an unforgettable Indian itinerary—view the Micato India brochure online and consult with one of Micato’s expert India planners.

Up Next: What I Saw On My 10-Day Micato Safari