What I Saw On My 10-Day Micato Safari 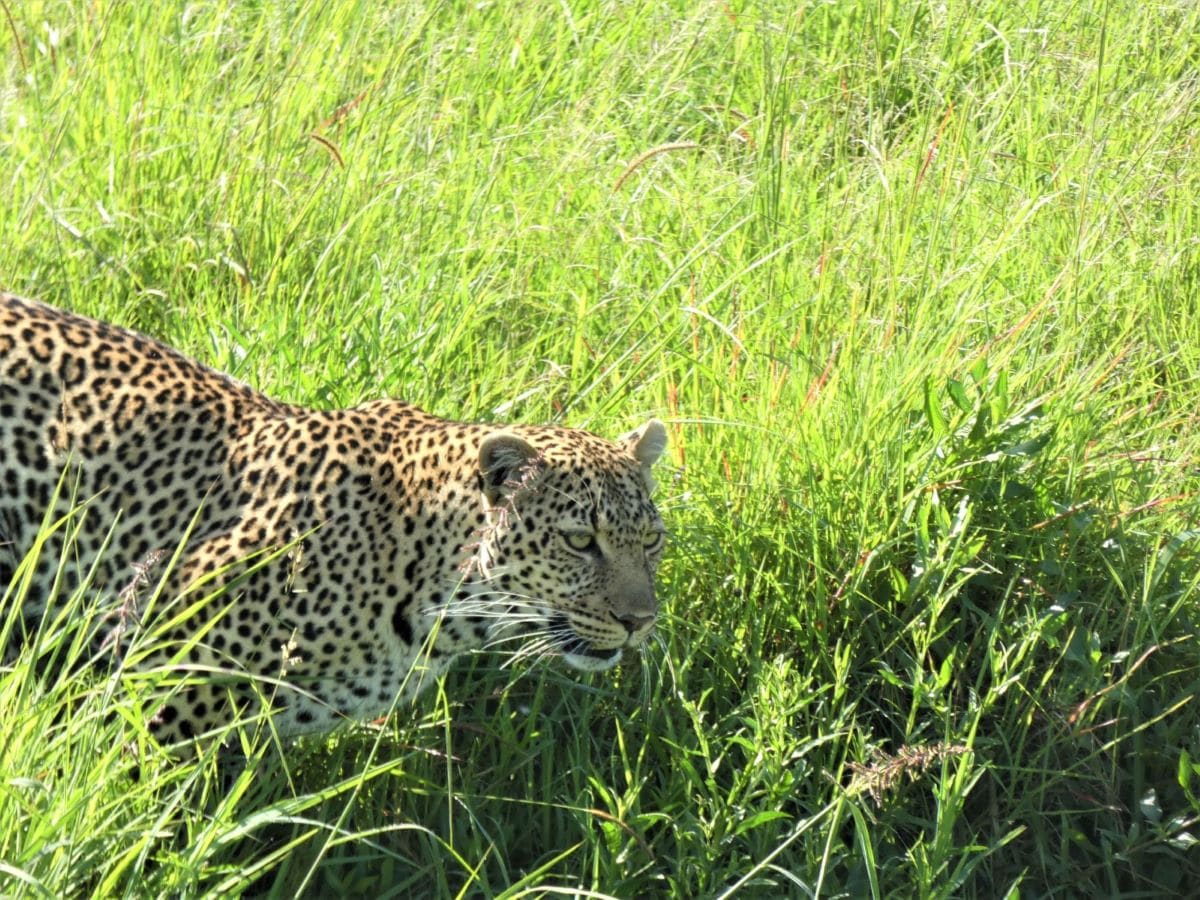 Seven days into our safari we had seen more creatures hoofed, clawed, winged, and furry than we really had any right to expect.

But this is a Micato safari so my expectations are pretty high, both personally and on behalf of the journalists I’m accompanying. And I should know better: After nearly 10 years of working here I know our guides can’t just make the plains yield creatures on command.

But our Micato Safari Director, with our group every step of the way during our 10-day journey, as well as our driver-guides, do seem to have an almost wizard-like ability to summon fantastic beasts out of nowhere.

We’ll have many hours of game drives on this journey, first in Amboseli, then in Lewa, and now in the impossibly fertile Mara. And we have already seen a lot.

“I don’t think I’ve seen so many animals on one safari,” says Alison Sager, who has been on many a safari. Alison represents Elewana and is shepherding the journalists with me on this journey. Fortunately we haven’t had to do a lot to manage expectations when it comes to animal sightings.

However, there was something missing from the Safari Animal Checklist we all pretended we weren’t keeping in our heads.

And then, this happened.

The video is by journalist Eric Rosen, a regular contributor to National Geographic Traveller, Forbes and other publications as well as host of the Conscious Traveler podcast.

That theatrical gasp you hear is genuine — I was one of the gaspers — because while we saw a lot on safari that was gasp-worthy, seeing a leopard is kind of a big deal.

It’s why “elusive leopard” is effectively redundant. If you’re lucky you’ll see one in a tree — leopards often hide, by the way, because they’re not super fast cats and use the element of surprise to fall upon their prey. So you’re very, very lucky if you see a leopard saunter and leap.

And, as noted, it takes more than luck. Part of what makes superior tracking skills superior is easy familiarity with these safari lands and who lives there, so naturally all of our guides know our leaping leopard by name: Luluka.

Travel writer Tim Johnson, also in the vehicle during the leap, said to me afterwards that during all the safaris he’s been on he’s “probably seen five leopards, but I have never seen one that close.”

And as if the universe was saying to Tim, hold my beer, the next day our guides brought us to the bedside of this leopard. And not just any leopard. This is Split Nose, so named because he tends to get into scraps and has the scar to prove it.

Luluka and Split Nose were the last of the Big Five on our nonexistent checklists. Herein, more glimpses of the Five and other remarkable things we saw while on safari with Micato. 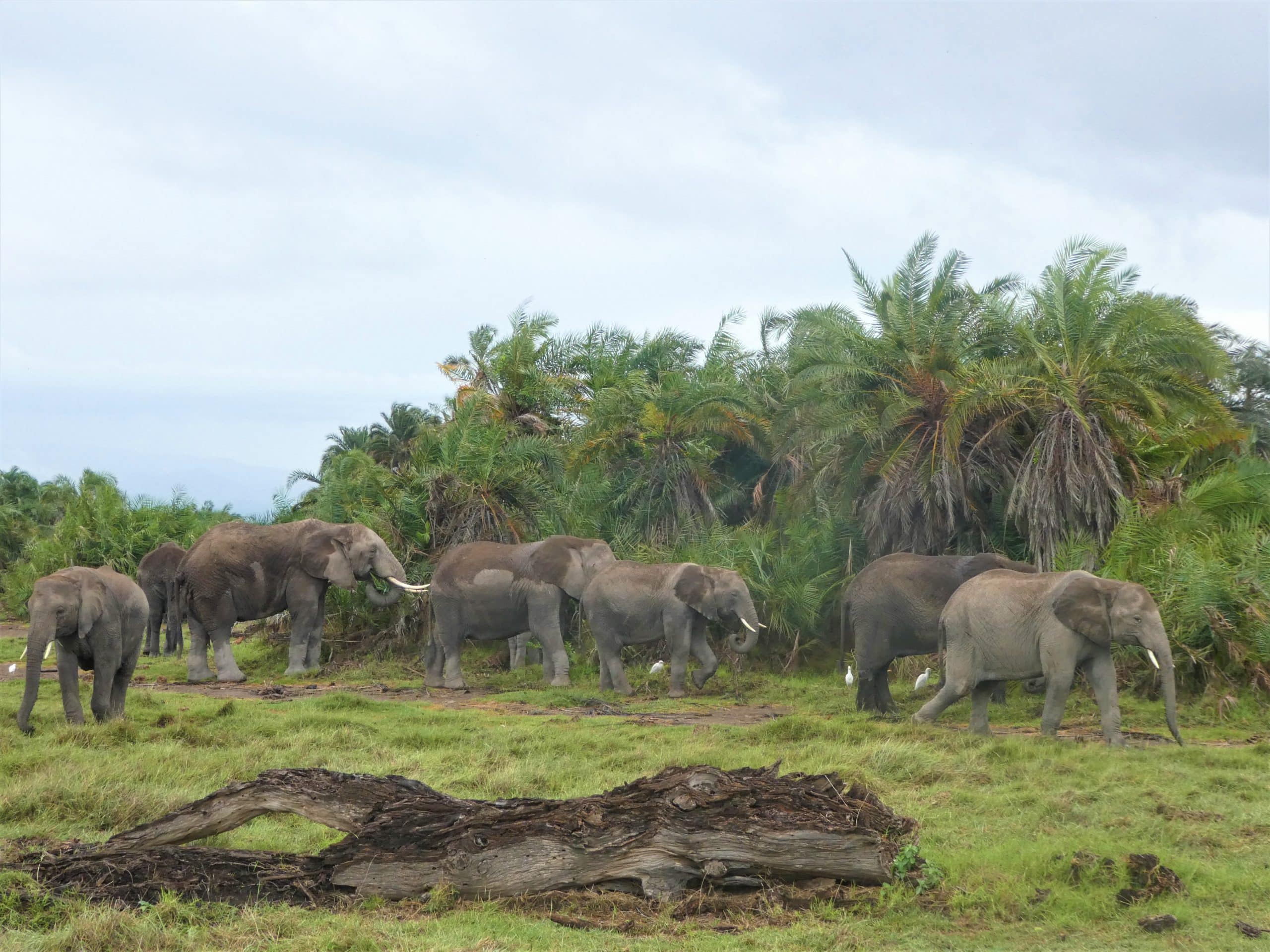 We saw them when they were still quite a distance away because they were, you know, elephants.

It was Day Two in Amboseli and the rain that had come and gone had given way to two things you get a lot of on safari, sunshine and possibility.

We pass a lone bull elephant in a patch and soon see two, then three, and whoa there’s a herd.

It’s something, really, when you’re in a safari vehicle and you’ve had vast honey-coloured plains around you for a while and then suddenly there’s a bunch of elephants gently lumbering forward on your left, and then you turn your head and are startled to see that you have elephants on your right, too.

About a yard away from this herd that’s advancing along the tree line, a mama is rooted to a spot in the grass, shielding her baby under the arch she’s formed with her body. 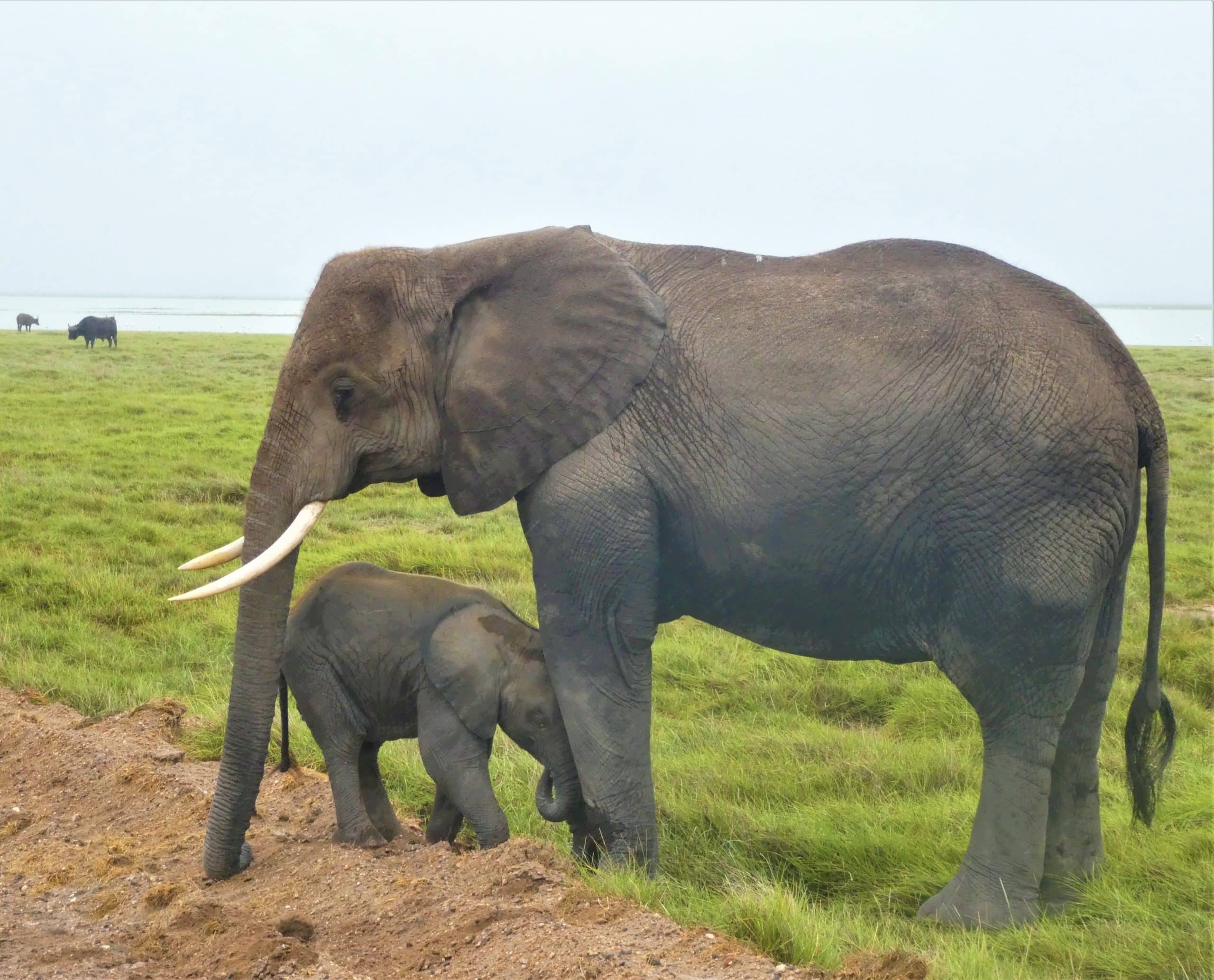 Without looking away from this duo I ask, “George, what is that baby doing?”

George is our Micato Safari Director and he knows everything.

Elephants have six sets of teeth during their lifetime, George explains. Every decade a new set wears out and a new one comes in, so that by the time an elephant turns 60 he must seek out softer food to chomp with his final set of worn-out teeth. And when he can’t find enough soft food to eat he often dies of malnutrition.

When an elephant dies, say, in the middle of the road, other elephants will try to prevent predators from eating their fallen comrade for at least two weeks. Years later, even if the remnants of the elephant’s bones are long gone, the other ellies remember the spot in the road where the body was. Elephants never forget.

Cubs and lionesses were hanging out in the tall grass against a rock. From our vehicle we see them pretty well, especially with our Micato-issued high-powered binoculars. I choose instead to scan this little lion family with the zoom on my camera. When I was last on safari I had a good camera but not a really good one with a lens that meant business, and this time I’m ready and relentlessly click away.

That I saw Luluka jump that trench with my own eyes was pure dumb luck, because I just happened to lower my camera right before the leap.

If I learned anything from my last safari, as well as every other trip I’ve ever been on, it’s that it’s all too easy to spend most of your time capturing the moment and not enough being in it. So spend less time behind your camera. The memories of what you see and feel on safari will last an extraordinarily long time, whether you’re gazing at a lion or laughing with new friends. Just trust me on this one.

All that said, once our driver fires up the motor and we move away from the lions, I review the photos I’ve just taken and decide I can be proud of this one.

If you’ve seen one sundowner, you’ve seen them all, said no one ever who’s watched the sun set all over Kenya.

And now back to the animals

Not only are we seeing a remarkable variety of animals but there are not a ton of people travelling on safari right now, so we often feel we have these game lands and all their creatures to ourselves.

Away From It All

Travelling during the pandemic required a lion’s share of precautions. The eight of us in our group — and anyone else flying to Kenya and South Africa these days — needed to carry documentation certifying that we tested negative for COVID-19 before boarding our international flights.

Once in Kenya, I was able to see in practice Micato’s extensive Covid-19 safety protocols, which we spent months developing and putting into place. Among our safety measures: Upon arrival at every airstrip, our team diligently disinfects all guest baggage — both safari duffels and hand luggage. 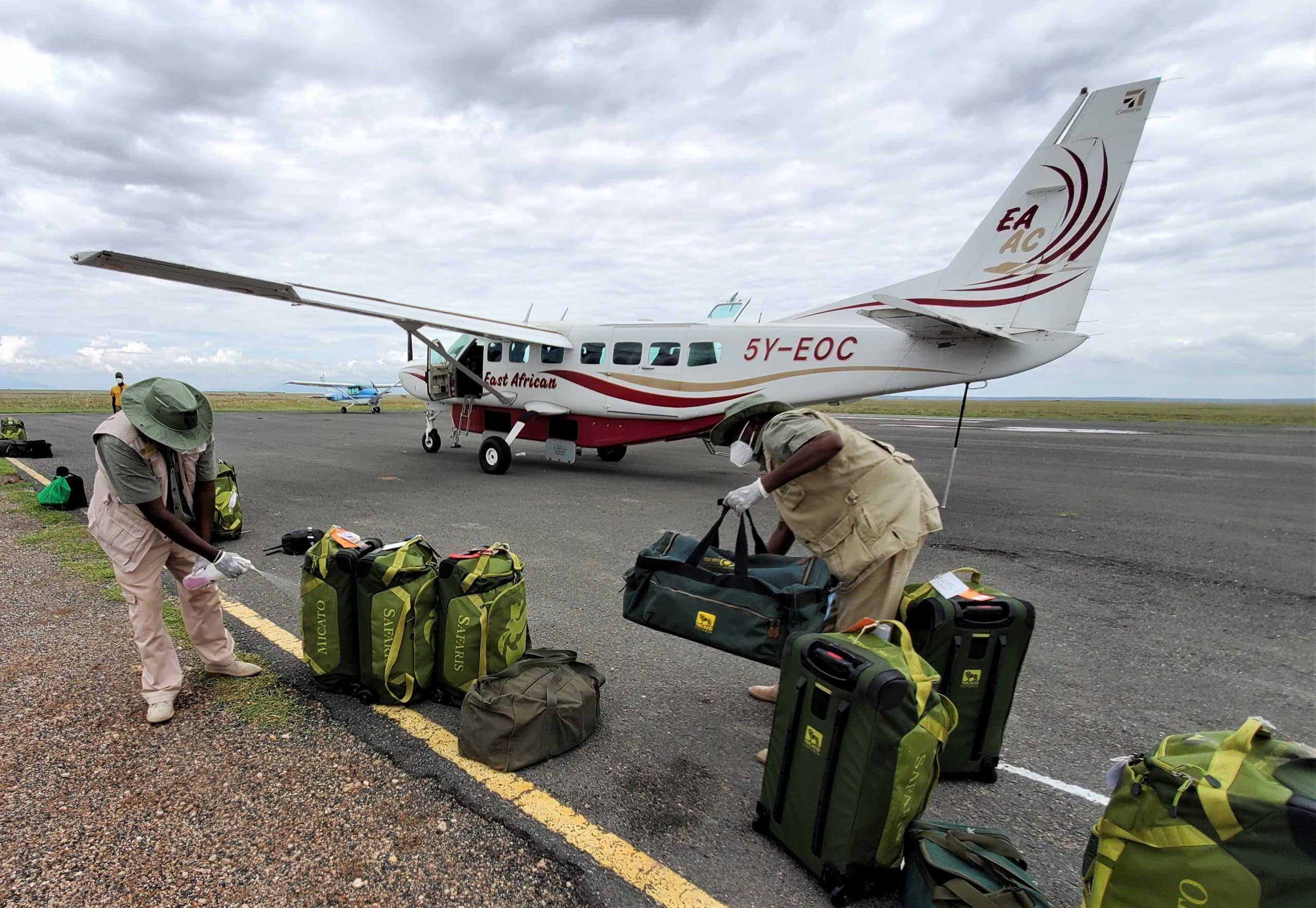 Also, all four of our flights between camps during safari were chartered just for our group. And yes, Micato can arrange private charters for your group, too.

Speaking of camps, we stayed at three beautiful ones — Tortilis Camp, Lewa Safari Camp, and Sand River Camp — thoughtfully run by our friends at Elewana.

At every camp we had space and solitude. At Sand River I even had a full-length mirror, which I call your attention to here because in it you can see me photobombing my own photo, my private outdoor deck in the background. 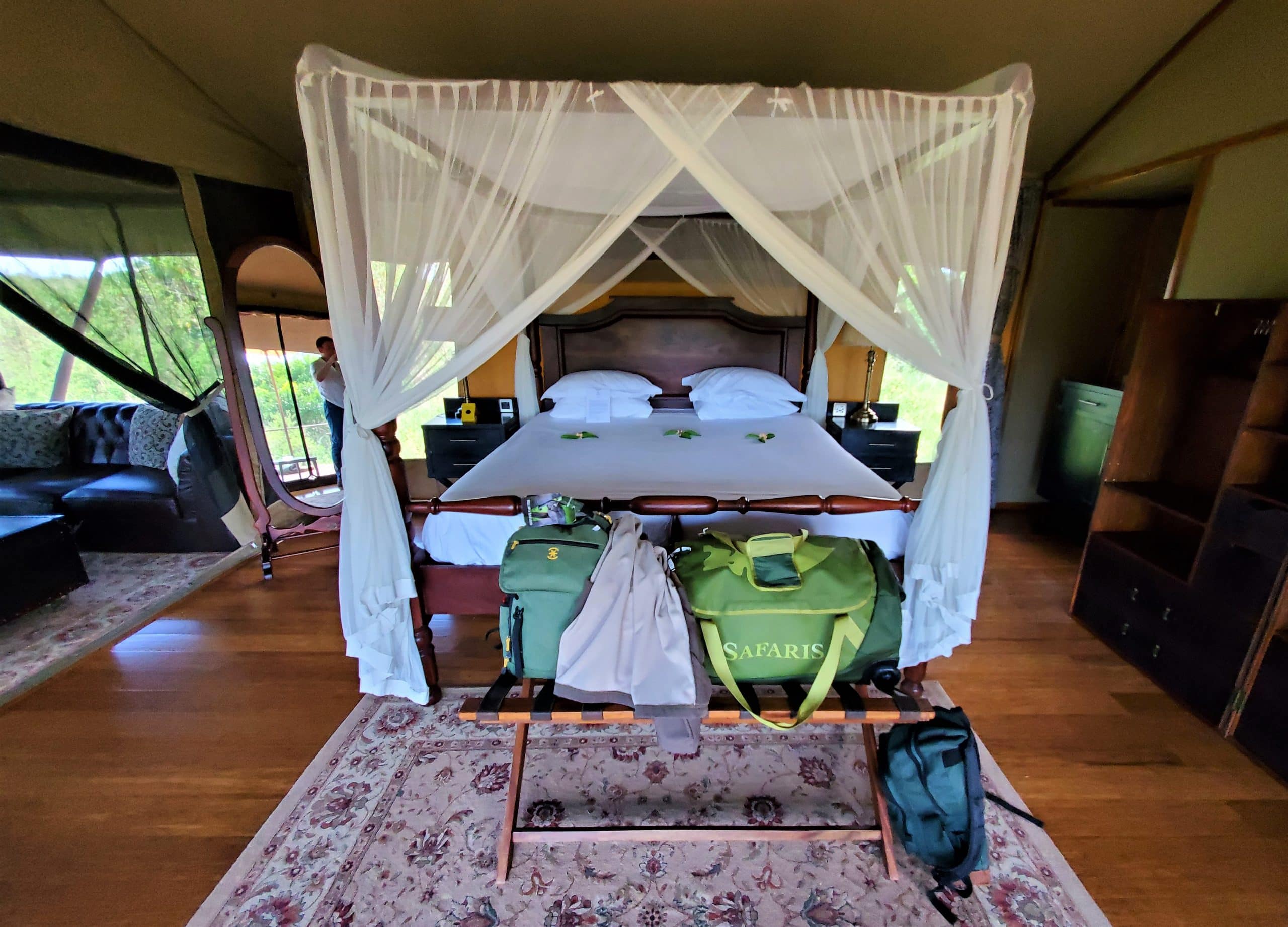 I have a special place in my heart for Lewa — not just its camps but the entire wildlife conservancy — because its simplicity and raw beauty spoke to me when I was first there nine years ago.

And this year I could think of nothing my soul needed more than simplicity and raw beauty.

Our group wore masks during the times you’d expect: Flights, airstrips, closed vehicles, and all public areas including while we were around camp staff and other travellers.

But once out in wide open space — and there is plenty to go around in Kenya — we took every delicious opportunity to breathe.

As our group got to know each other and coalesced into a private pod, we found many places and moments to breathe… in open-air vehicles, where we spent most of our time, during cocktails and meals (we had lots of those, too), while admiring the plains during bush breakfasts and sundowners, in and around our private tents, of course, and, when soaring above the Maasai Mara during our surprise hot-air balloon safari.

A few days before the eight of us scattered to the four winds, we had a final bush breakfast in the Mara that included a modern twist: As secure as we were in our little pod, many of us needed or wanted to have a Covid-negative test result in hand before boarding our international flights.

So Micato did something very Micato and arranged for a technician to motor into the bush and test us all before we tucked into our plates loaded with made-to-order eggs and sizzling bacon perfectly succulent and crispy. I digress, but bacon lovers you feel me, right?

Most of us were heading home — which included New York City, Los Angeles, Washington, D.C., and Rome, while two in our group were continuing their travels, venturing on to South Africa — so all of us had slightly different requirements and timing to consider for our testing. The Micato team helped us iron out all those details.

An Oasis of Calm

After winging our way back to Nairobi from the Mara, George escorted our group to Mukuru for a private tour of the Micato-AmericaShare Harambee Community Centre and the headquarters for Huru.

AmericaShare works exceptionally hard to maintain and improve its educational and community outreach as well as the facility itself. And so much has changed since I was last here.

I mostly know of the many renovations here over the years from proposals and photos and second-hand accounts, so when I walk into the quiet, grassy courtyard of the Harambee Centre and see the new buildings and walkways and spruced-up basketball court my eyes fill with tears, but fortunately at that moment everyone else is focused on our student guide, George.

That’s because George, who tells us he joined the AmericaShare family as a child and was later admitted to the School Sponsorship Programme, has just casually mentioned that he is now in medical school. Even with masks on I can tell jaws are dropping. 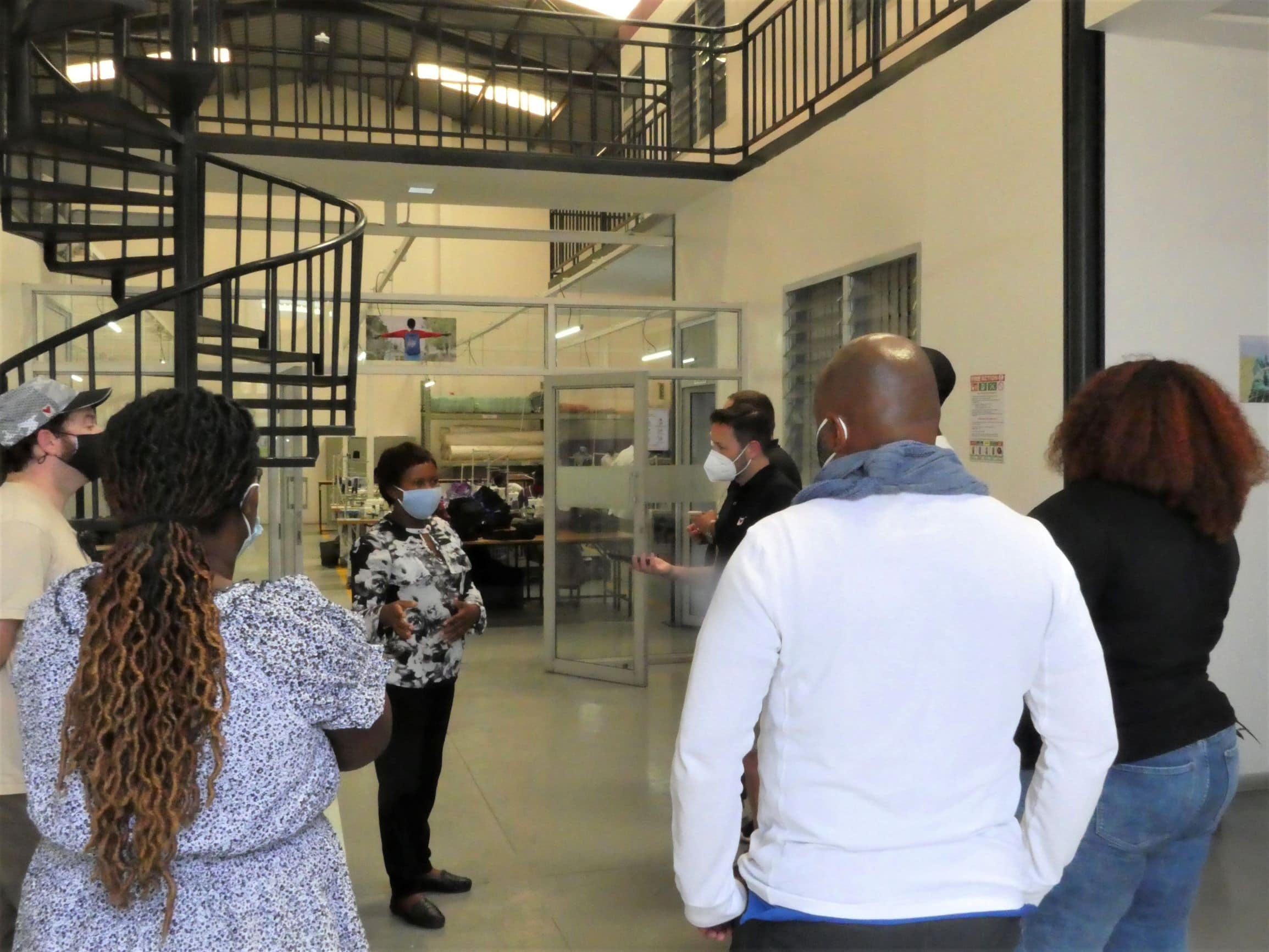 Every corner of AmericaShare and Huru and every person, from the administrators, librarians, and students to the women sewing, radiate breathtaking diligence and sincerity, and something you just feel in the air as you walk around here: Hope.

We saw and did much more during our 10 days on safari, but a single blog post should only be so long. But if you’re thirsting for more animal photos in particular, I took hundreds, which you’ll find on the Micato Instagram, Facebook, and Twitter channels, along with photography by other Micato travellers and Micato Safari Directors

In the meantime, request the Micato Brochure, where actual pro photographers outdo themselves capturing the bush in full colour. Then get in touch with us in whatever manner you see fit — we’re flexible like that — and a Micato Safari Specialist will be happy to chat about all the ways to safari with us when the time is right.

Up Next: Top 5 Luxury Lodges in Southern Africa