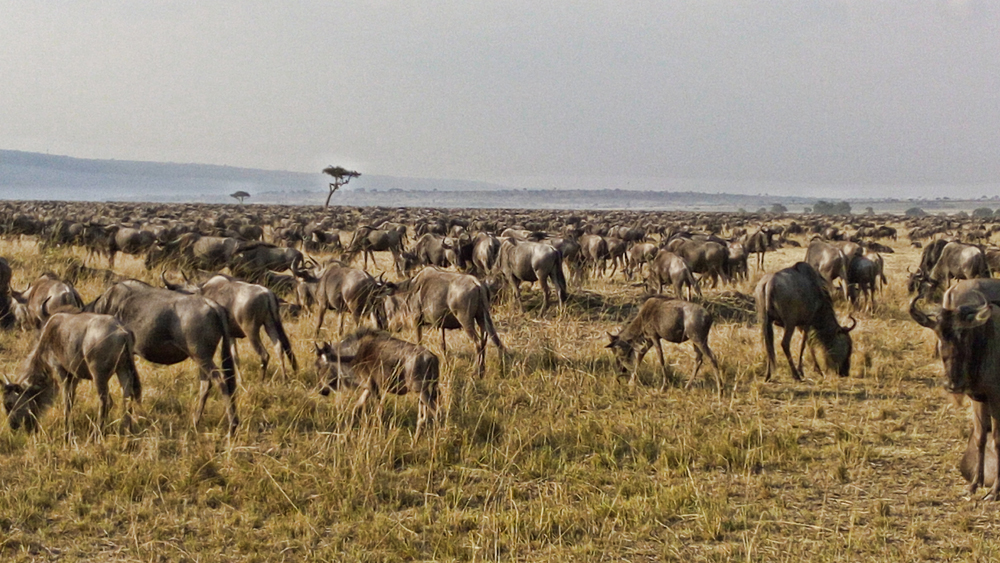 A month earlier than usual, the crazy wildebeest train has pulled from the station. We take a VIP seat on a Micato safari to experience the annual Great Migration from the air


There’s a hairy animal as heavy as a grand piano running full tilt in my direction. No, wait, there’s a dozen. Now fifty. A hundred… Ok, there’s nearly half a million of them with just one thing on their minds. They want fresh grass, they want water — and they want it now.

The largest annual mammal migration on the planet has begun — several weeks ahead of schedule. Spurred by a rainy season short on rain, the rushing army of wildebeest (also known as the gnu) has mobilised early. Already, they are heading north across the Serengeti into the fragrant grasslands of Kenya’s Maasai Mara. Reaching speeds up to 40mph, they’ll travel as far as 1000 miles each year to reach the fertile grasses they need to feed.

Who has the best seat in the house for this unbelievable safari?

My safari party is airborne at dawn, floating in a striped hot-air balloon over the plains of Africa. Part Jules Verne, all David Attenborough, we’re so close to the four-legged action it feels like we’re grazing the grazers themselves.

“Err! Errr! Err! Err!” These guys make a huge racket. A cacophony of grunts and moans rises on the breeze as our balloon drifts elegantly over the warm air. “Err! ERR!! ERRRR!!” While the galloping mass is obviously travelling in one general direction, any number of them is running sideways and backwards at the same time, changing angle and direction like Scrabble letters in a bag.

“We believe god made these wild beasts last, after he made all the other animals,” our Micato Driver Guide Wesley explained earlier. “Look for yourself, you will see they are made entirely of spare parts. They have the head of a grasshopper, the mane of a lion, stripes from a zebra, legs of a hyena, the tail of a horse, and the brain of a chicken.” We all tilt over the edge of the padded 16-man wicker basket now for a better look.

Just beneath, a rolling, rumbling river of spare parts is unfurling at our feet. It weaves and snakes as if it has one mind (plus the occasional dissenter). Zebras mingle in and out. The odd giraffe surveys the lot. A family of warthogs belts through in a zig zag. The sporadic hiss of butane-powered hot air is the only sound to punctuate the bellows and grunts and the low whooshing notes of a thousand hooves cleaving soft grass.

We snap photos, we stream video, we are mesmerized.

“Tip Over” Landing: Brace Yourself

Floating slowly across the Burrungat Plains, west-south-west towards the Tanzanian border, a handful of balloons dot the pink African sky like lollipops. At our helm is Captain Andrew: with over 3500 flying hours, he’s one of the most experienced commercial pilots in Kenya. He’s worked as a commercial balloon pilot all over East Africa, Zimbabwe, as well as Italy and the UK. (Aside from all that, you’ve got to trust a pilot who brings his three year old along for the ride. “He wails and cries if I don’t,” laughs Andrew.)

An hour flies by in a minute and too soon Andrew reminds us to sit and hold tight to the rope handles. “About 50 percent of our landings are what we call a “tip over” landing,” he explains. Here comes the earth up to meet us (quite swiftly!) and, right on cue, in a lush grassy patch we touch down once, twice and then the basket tugs along the ground for a few metres and… Plop! We’re lying on our backs and laughing like hyenas.

Terra firma and one more treat. Brekkie is the full shebang: a long table laid with linen and crockery, a buffet of eggs and bacon, glasses of bubbly all round. Raising a toast to god’s last creation — crazy beasts on tour — we tuck in. And just a few miles further north, I’m told, where the wildebeests cross the Mara River, some happy crocodiles will soon be doing the same.

Leslie Woit is a freelance writer who travelled with Micato to Maasai Mara, Amboseli and Meru National Parks.

Want to experience Africa’s Great Migration for yourself?

Up Next: 3 Royally Hot Safari Spots