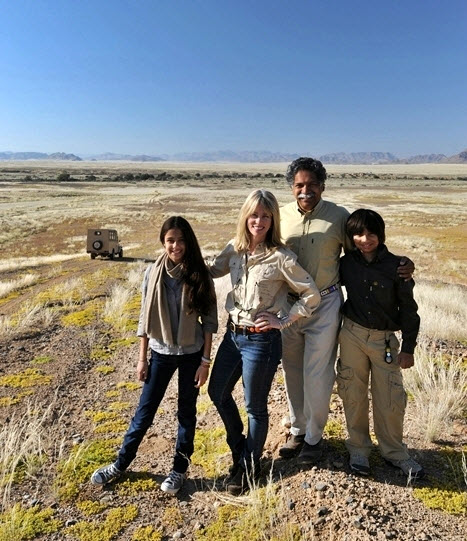 The quaint hamlet of Swakopmund was only on our itinerary because of a flight misconnect. In fact, it’s rarely on anyone’s itinerary. But it should be. We completely adored it.

With the ambiance of a tidy colonial German village, it’s a perfect gem. Moreover, it’s a haven for active sport lovers, while the less-active will find paradise both in the town and on the harbour cruise at nearby Walvis Bay, which was, in a word, astonishing!

Being from New England, Joy was initially blasé about a Namibian harbour cruise. But when the first of the many adorable, puppy-faced Cape Fur Seals trundled up the steps of the boat, waiting to be invited aboard, we were all in love. Fur seals are characters, funny and playful. And, it turns out, rather polite.

That was only the beginning. Bottle-nosed dolphins swam alongside, causing the seals to splash us when we ignored them. Plus, depending on the season, there are also whales, the occasional leatherback turtle, cormorants, pelicans, herons, flamingos and even more exotic creatures like sun fish, a reminder that not all harbours are alike.

The Captain and crew were great fun, hugely informative and absolutely charming. Serving enormous platters of the sweetest local oysters imaginable, they also offered German beer and Sedgwick Old Brown Sherry (of South Africa renown), insisting that the libations counter-balanced the ship’s movement. And we believed them.

Our one regret was that we didn’t have more time. Dennis and Joy yearned to sea kayak with the fur seals and dolphins. Tristan was keen to try “ecologically sensitive” quad biking and deep sea fishing, while Sasha thought sandboarding sounded pretty nifty. Tandem skydiving, dune parasailing and paragliding would also have to wait — for a long, long time, as far as Joy was concerned!

Our people in Namibia also took care of Angelina and Brad during their baby confinement at neighboring Long Beach, and we (guiltily) enjoyed their fascinating Brangelina stories, too—a lovely family by all accounts.

The old German Railway Station from 1901 is now the marvelous Swakopmund Hotel, but we hardly had a moment to enjoy it. Our evening was filled with another incredible adventure: drinks high atop a rocky outcropping, facing the dramatic Mountains of the Moon landscape, and a seriously gourmet dinner staged deep in the ancient rock canyons of Moon Valley, glowing in the light of a thousand candles. What could possibly top this? 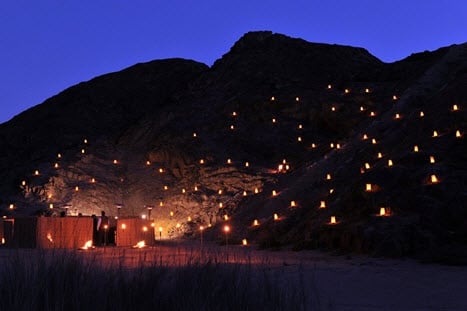 Well, the towering sand dunes of Sossusvlei topped it pretty quickly. They’re preposterously beautiful. Furthermore, flying over the Sossusvlei Rift Valley was perhaps the most spectacular flight of our collective lifetimes. 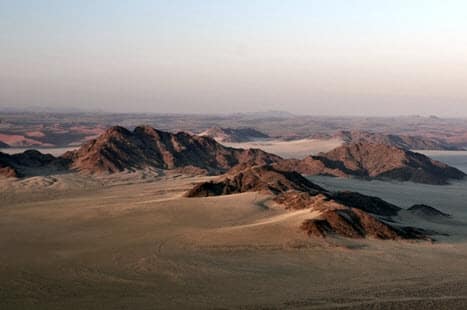 In the last few months, Sossusvlei has received its heaviest rains in twenty years and the desert is positively glowing in velvety green vegetation. It’s almost eerie, actually, but exceptionally beautiful. Some scientists speculate that Africa has just finished a 20-year dry period and is entering a 20-year wet cycle.

From our anecdotal observations, that would be correct.

Indeed, it is odd to see those colossal, iconic, pink-orange sand dunes dotted in green. Even odder still is seeing the Namib Desert no longer a brown barren stretch of sand, but delicately layered in verdant waving tall grass as far as the eye can see. Green, brown or pink….we couldn’t gaze at it long enough. 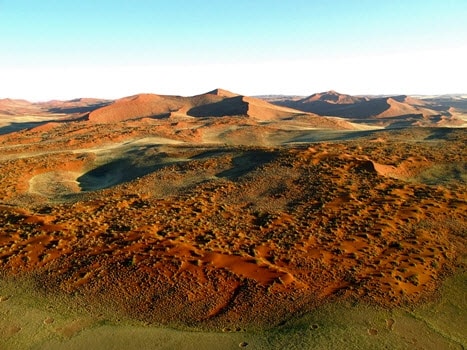 First we took to the sky in a hot air balloon and soared at sunrise over the dunes, desert and salt pans, gasping in amazement at the lofty mountainous shapes and luxuriant widening landscapes changing colors in the rising sun. We’ve made myriad spectacular balloon flights over game-rich South African veldts and East Africa savannahs, but the scenery here is much more dramatic, and in many ways, more breathtaking. During the champagne breakfast that followed the flight, we were surrounded by remarkable beauty in every direction. 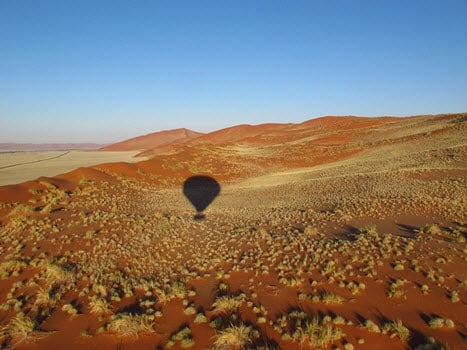 The following day was equally memorable. We packed a full proper British afternoon tea and outfitted ourselves in full bush picnic style – safari chairs, tables, kilims and all – to enjoy on the edge of the towering dunes. We admired the view, dined, laughed and documented the occasion.

When the sun lowered and the sand cooled, we made the magnificent ascent of an arm of the Big Daddy dune. Graham, our fun and fabulous pilot who has been flying us throughout Namibia, led the charge. (Our children would have followed him anywhere!) Jane and Felix wisely observed from the comfort of the picnic. 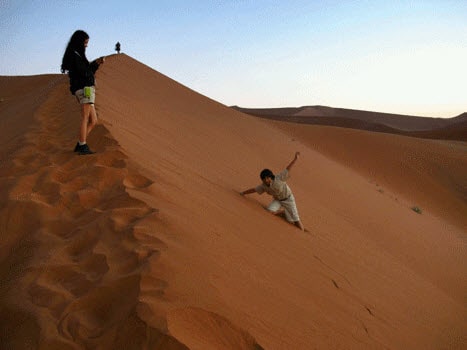 We departed the dunes after the sun had disappeared, but before the moon had risen—during that charmed period when the sky is pitch black and the firmament is dusted with a zillion stars. We stopped to stargaze, of course. Never before have we seen the Milky Way so wide and so bright. And seldom have we seen so many constellations so clearly. Our children can now easily spot Scorpius, with the Southern Cross as their anchoring stars.

That night we slept in “starbeds” on the flat top roof of our lovely chalet room, naming constellations and admiring the moon. It was crisp, clear and oh so exciting. The next day, we jumped into vehicles to find desert game like ostrich and springbok, and after nightfall set out again to locate bat-eared foxes and aardwolf in the cool desert air. We took a magnet and lifted iron ore out of the dune’s rich sand, miraculously filling half of a bottle. And, in between, we luxuriated in the lodge’s modern design with its soothing neutral colours, gorgeous textures, huge serene rooms and refreshing private plunge pools.

Graham played chess with Tristan, Jane relished the company of her granddaughter, Felix and Dennis enjoyed the luxury of chatting about everything from politics (on two continents, no less) to the potential of electric safari vehicles, while Joy, when she wasn’t blogging, at long last caught up on her reading.

Experience the beauty of Namibia!

Up Next: Dispatch: Moonlight in Namibia