With tradition wrapped into daily life and thought interwoven with community, Southern India is a whole world in itself. A typical morning begins with the woman of the home designing a Kolam or pattern created on the floor using materials such as rice paste, coloured sand or flower petals. It is believed that a Kolam at the entrance of a home purifies and brings calming energy to guests and hosts alike.

India has a reputation for being hospitable and welcoming. And for South Indians, hospitality is synonymous with culinary indulgence! In Kerala, the land of spices, you’ll wake up to the aroma of dishes tempered with cinnamon, curry leaves and black pepper. In almost all Indian homes, fresh produce and spices are the stars of the daily dining spread. It is no wonder that the many traditions of culinary art in South India are nothing short of magic!

Although inviting, food isn’t the only significant feature here… Also known for ancient temples, Ayurveda, coffee and tea estates, spice plantations and, of course, silk weaving, every Southern state and the cities within, is a unique tapestry of the world. Take a walk through the markets in Cochin and discover a secret spice auction room. Journey to Mysore and sample the delectable dessert Mysore Pak. Arrive in Chennai and absorb its history and modernity interlaced with one another. A Southern India Tour is all this and delightfully more! 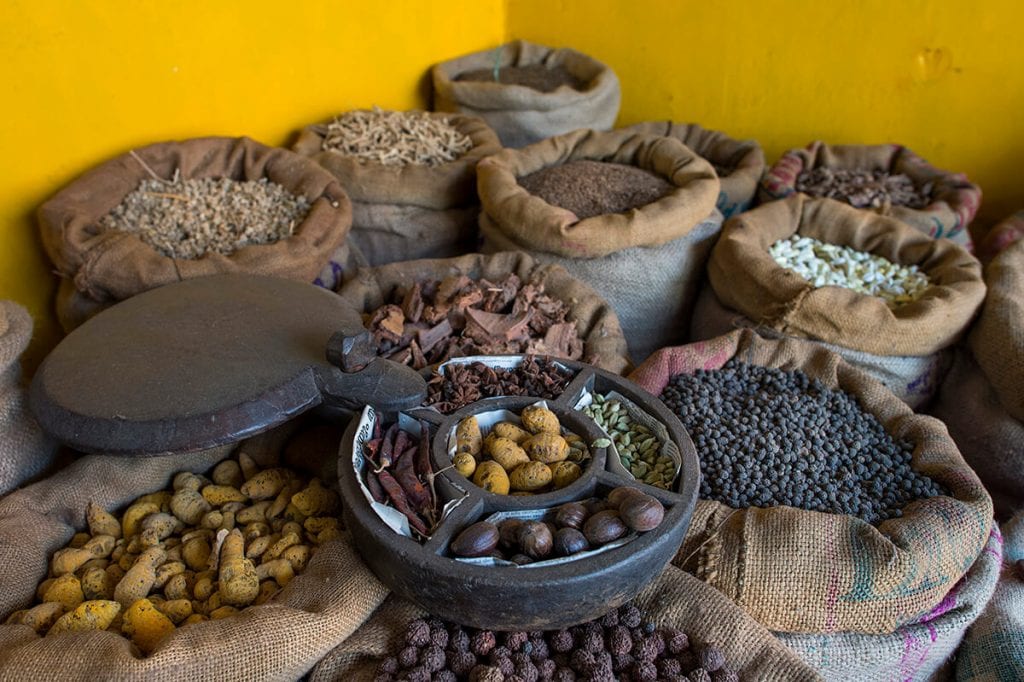 The Story of Spices

The spices of the South have been in the pages of history since at least 1500 BC, if not earlier. When the Maritime Silk Roads were discovered, spices were consigned to the trading countries through sea routes and also in large caravans of camels and horses through land. By the middle ages, spices became a coveted commodity. A pound of ginger was worth a sheep; and pepper, the most prized spice, was traded for gold! Kerala, famed with its moniker of God’s own country, is also the land of spices and its most famous port-city Cochin, has been an unofficial capital owing to the substantial spice exports.

Every street you walk down, you’ll find a familiar fragrance…and yet each time it will be unique, too! Cloves, nutmeg, tamarind, chilies, cinnamon, cardamom, ginger… name it and they’re all there! Although some spices are common between North and South India, the southern flavours are distinct. While North India is know for the use of cumin, raw mango powder and fenugreek leaves, South Indians prefer the generous addition of mustard seeds, tamarind and curry leaves. The numerous South Indian spices don’t have just one purpose – their medicinal properties are the basis of an entire system of alternative medicine as well. Turmeric powder used in traditional dishes like sambar or rasam, provides relieve from a cough and cold and is also known to possess cancer-fighting abilities. Cinnamon is best known for its anti-inflammatory properties, and curry leaves help with digestion.

On any South India tour, be it Kerala, Karnataka or Tamil Nadu, you’ll even find all of these signature spices together in one box. Experience delectably new tastes made from a plethora of fresh, local ingredients. Not to mention the coconut milk and spice-infused seafood that is every food-lover’s dream! Visit a spice plantation in Periyar, try your hand at preparing a recipe with traditional South Indian spices in Cochin, or simply amble through the bazaars of Chennai to experience the spices of the South.

The Story of Silk

On a Southern Indian tour, a common sight is the six-yard-long, brightly coloured saree. Wispy cottons, shimmering brocades and glistening silk… and not just any, but fine silk from Kanchipuram that have carved a name for themselves. This epicentre of silk weaving is located only a couple of hours away from Chennai. Known as Kanjivarams, these silk sarees have become prerequisites for many brides. Journey further westwards to the state of Karnataka and you’ll come to Mysore, where silk moths are reared, cocoons are nurtured and processed, and pure silk is woven.

The origin of silk in South Asia dates back to the 3rd millennium BCE. India was producing brightly coloured, naturally dyed fabrics for the royal families. As silk caught the eye, the tradition of weaving sarees from it in red and gold for dedication to Gods and Goddesses began and eventually silk became the prize of the royals and the affluent. The silk thread was often dipped in liquid gold or silver to create intricate woven motifs on the sarees. Over time, silk weaving centers were set up around the capitals of kingdoms and holy cities to meet its ever-growing demand by the kings and the temples. The craft grew and silk became a conversation for trade. India became the only country that produced all types of natural silk. Today, Karnataka, Andhra Pradesh and Tamil Nadu are among the leading states producing silk yarn in India. Mulberry, tussar, eri and munga are all types of silk special to India.

Villages that supplied silks to the great kingdoms of South India a thousand years ago, still continue to painstakingly handcraft their traditional work. In the narrow lanes of Kanchipuram, Mysore and Hyderabad, age-old secret traditions of weaving magic with wefts and warps are still practised by skilled families. 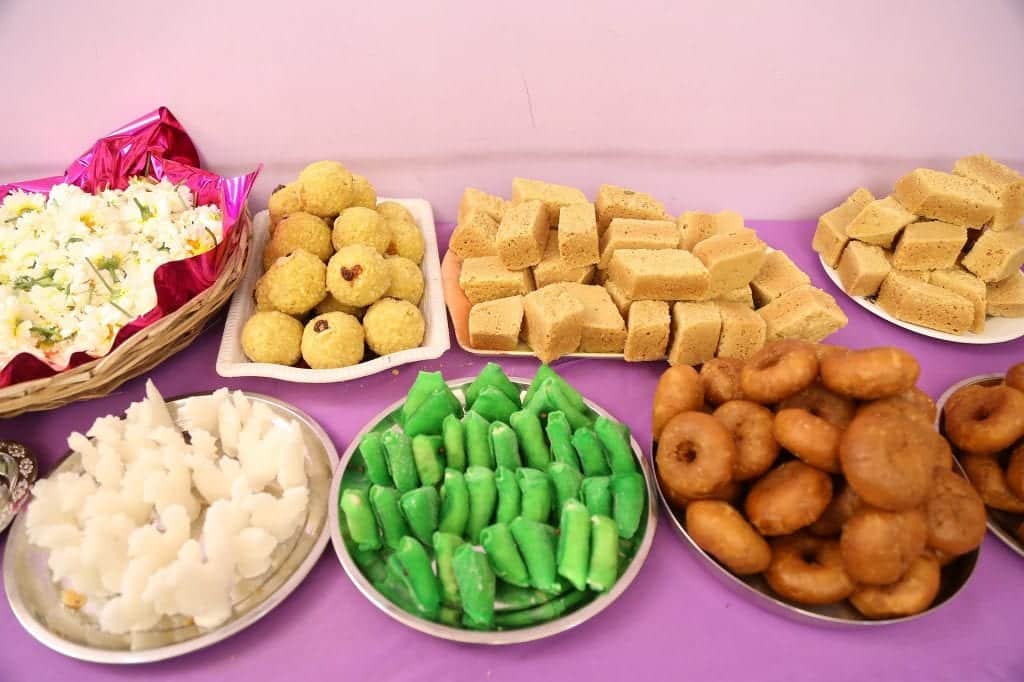 The Story of Sweet Mouthfuls

A typical South Indian dining spread includes dosas or savoury crepes, lightly fermented rice cakes called idlis, and sambhar, a tangy soup of fresh vegetables and spices. As delectable as they sound, the highlight is almost always the sweet delights on offer.

Among the most favoured desserts are Badusha or deep-fried doughnuts; Seeni Mittai made with a mixture of rice flour, pulses, cardamom and sugar; Boorelu which are deep-fried sweet balls; and Kozhukkattai, sweet dumplings made from rice flour in Tamil Nadu. Most desserts use common ingredients like jaggery (unrefined sugar), milk and a sprinkle of spice.

Yet another popular dessert at every household is the Keralan Payasam. Served on all festivals and offered in temples during auspicious occasions, it is similar to a north Indian kheer or a rice pudding. Traditionally, the women of the house prepare it using rice, coconut milk, jaggery, cardamom powder and some dry fruits.

And then there is the Mysore Pak which takes the crown. Deigned as the ‘royal sweet’, even today it is considered as the ‘king’ of all sweets in the south. Made from generous amounts of pure ghee or clarified butter, sugar and gram flour, its melt-in-the-mouth texture is certainly hard to resist!

Exploring The Best of Southern India

Begin your explorations in multi-cultural Cochin, the shining pearl of Arabian Sea tour. Make your way through Periyar, famed for its spice plantations, and Madurai, the holiest of holy cities. Then you arrive in Chennai for a dip in the spiritual and a plunge into ancient architecture. Don’t miss Kanchipuram, the centre of 8th century ruins and Kanjivarams. Travel to Mysore, famous for its silks and Mysore Pak. In the end you will have arrived at Hyderabad, where the reigning Nizams left an indelible legacy.

To start planning your journey, view our Micato India Journeys brochure online and contact one of our India specialists today!

Up Next: Adding a Wine-Estate Stay to Your Safari