In Search of the Luminous Beast

We arrive in Ranthambore in the afternoon, after driving from the Taj at Agra. We feel like we’re going from the sublime to the scintillating…if, that is, we see one of Ranthambore’s 60-or so tigers. Chances are—you could spend hopeful hours Rubikscubeing the odds: good, excellent, nearly inevitable, probable, likely. We check into the almost disconcertingly stunning Vanyavilas, and make the short drive to the park for our first game drive on our luxury safari. 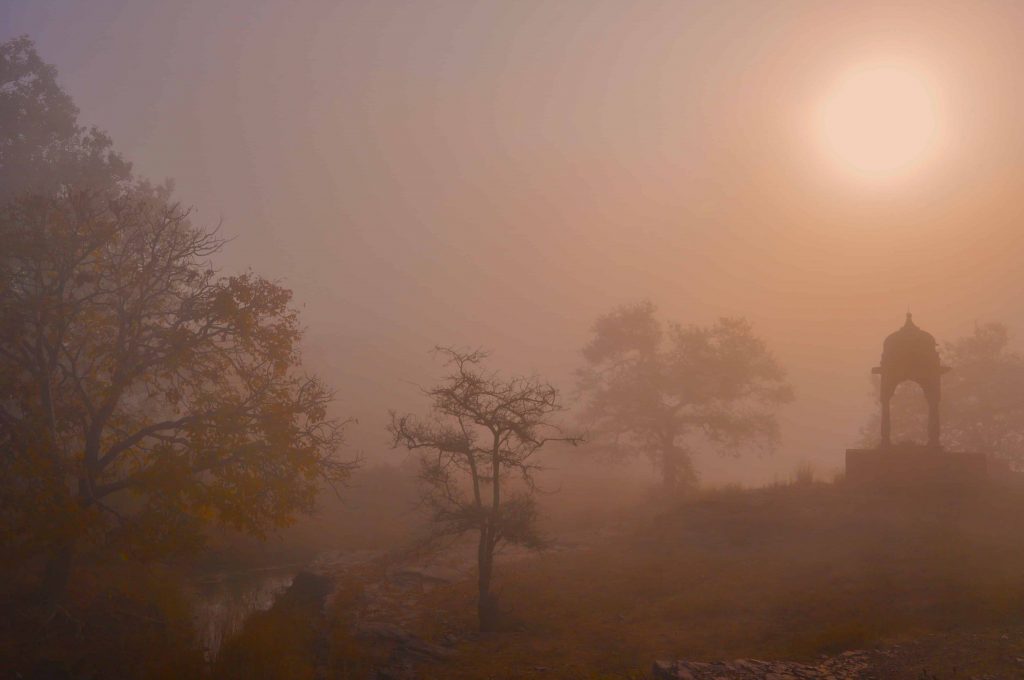 Ranthambore immediately impresses us as extraordinarily well-run; reading Indian newspapers—the Times of India seems to run a tiger story every other day—convinces us that the country is immensely proud of its tigers, and intent upon protecting them in their wilderness kingdoms.

Ranthambore’s almost 97,000 acres are divided into several zones, and the modified four-wheel drive vehicles we use—each with a driver and local guide—are restricted to one zone per game drive, most of the time we putter along alone. As we enter the gates, we see an abandoned temple in the wintry haze. I think of Kipling, and his wonderful Jungle Book, which has been immediate and dear to me for many decades. We see a couple of sambar (large Indian deer) quietly munching, their ears twitching. The stakes differ dramatically, but they too are on the lookout for the same tigers we’re so eager to see. 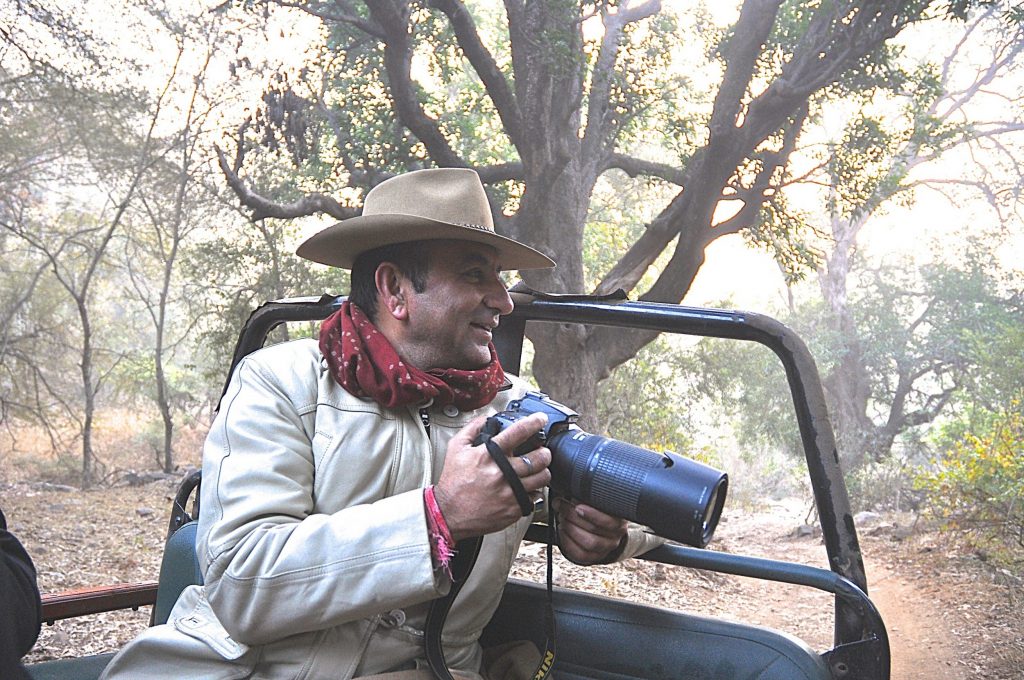 Our Micato Safari Director is Hemender Singh of Vedsa, a classic Rajput gentleman of the New School. Which is to say he’s very Old School, but very at home in the modern world. Rajasthan—we’re in the eastern part of the state—is immensely proud of its chivalric traditions, and the Rajputs consider themselves princely stewards of those traditions. Charming, plugged-in, a real professional, Hem collects vintage cars (including a scrupulously restored WWII-era Willys jeep), and lives in Jaipur with his wife and a rambunctious St. Bernard. I’m fired up by the many tiger pictures housed in that no-kidding-around camera of his.

Late in the afternoon we spot a tiger. In the distance, across a stream, amidst high brush.  We can barely see him, but his presence is gravitational, like a pulsar in the forest. 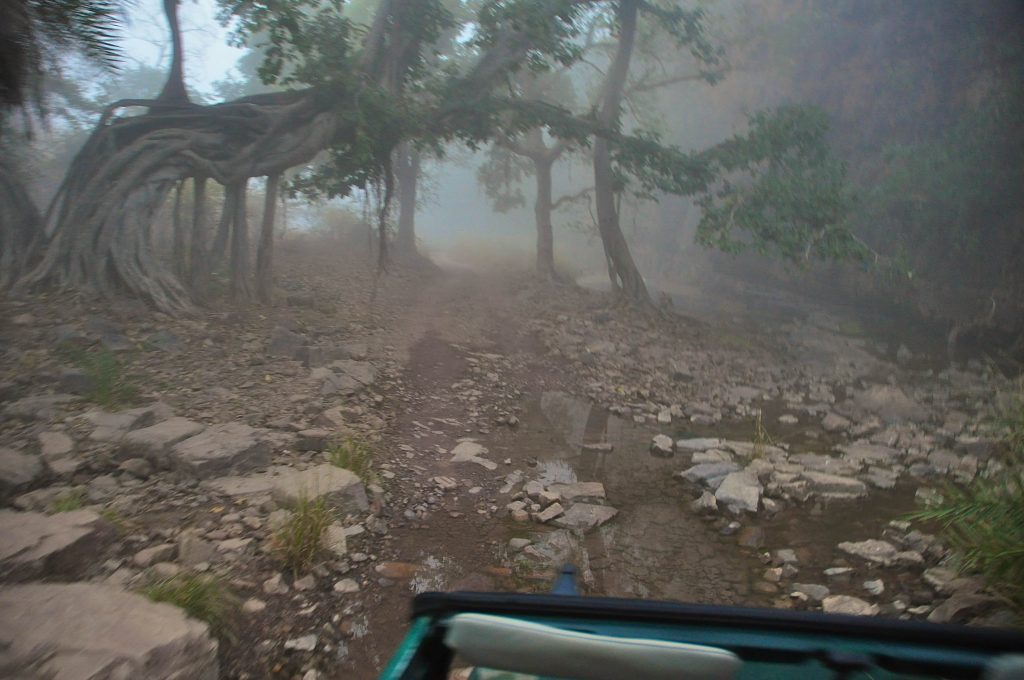 We’re back early the next morning. Yesterday’s sighting was a relief. Now we can say we saw a tiger, however remotely. No more having to weigh the difference, if any, between likely and probable.

As the sun melts the morning mist, we look up to the golden cliffs of the ancient Aravalli Hills, which run like a forested theme through northwest India. Our local guide, young Ashitesh, half stands in our cheerful Maruti Gypsy King. He’s on full alert.

How to know when a tiger is near? Well, if you have keen ears, you notice noise. When tigers walk in the forest they’re preceded and surrounded by monkey shrieks, bird calls, sambur fluting, and a host of undefinable warnings. Ranthambore is inhabited by extremely cautious leopards, nilgai (Asia’s largest antelope), wild boars, chitals (a spotted deer) sambars, hyenas, sloth bears, and southern plains gray langurs and rhesus macaques, screechy members of Kipling’s monkey corps, the frenetic Bandar-log.  Every one of these one-hundred-percent sentient beings has a mortal interest in knowing when Shere Khan decides to take a stroll.

Ashitesh and the driver listen for whorls of sound in the jungle and watch the road for signs. “Stop,” the young fellow says. And there, stamped in the dust, big as a dinner plate, is a paw print. 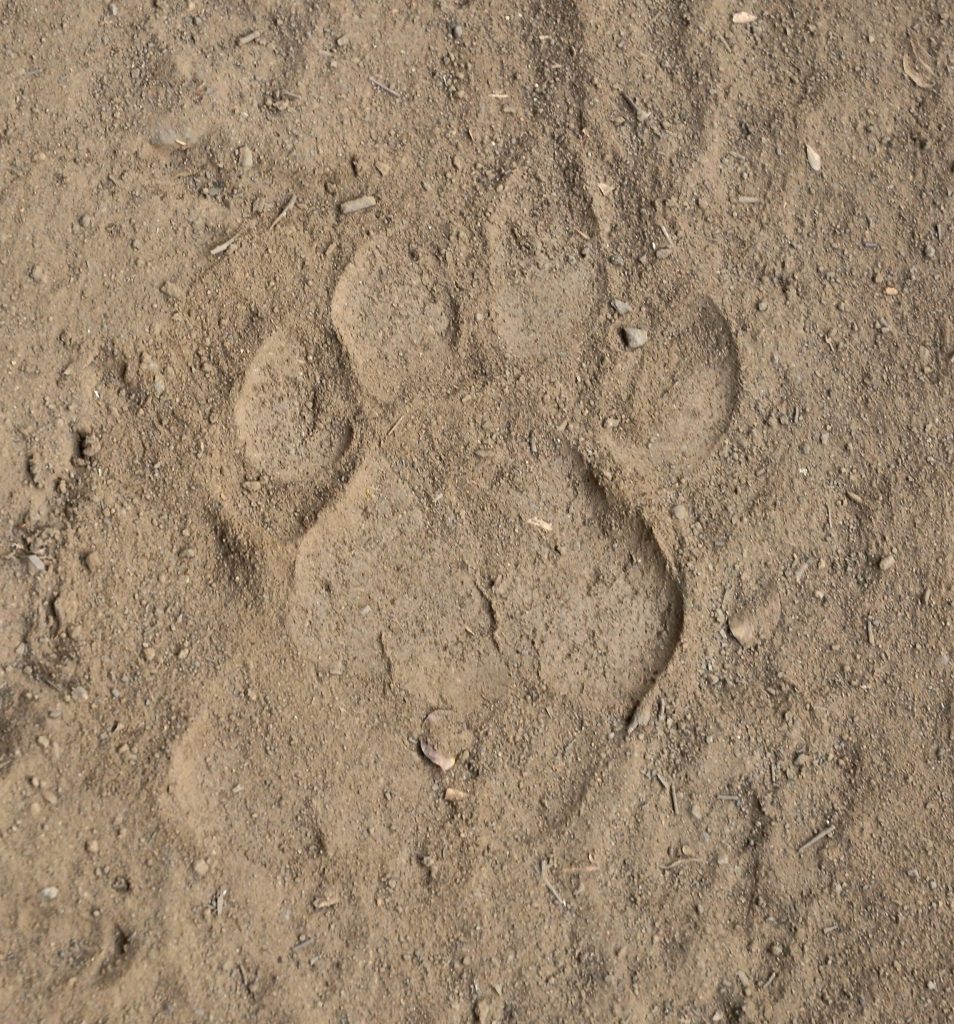 Tigers, like most wild animals, often like to amble on man-made roads. (I think of a British Columbian friend who told me about snowmobiling one day down a snowy road in the mountains and coming across a moose headed the other way. Thinking the moose would grant him right of way, he barreled on. He lived to tell the tale, but his snowmobile was totaled, and the moose was undetoured.)

A few moments after seeing the paw print, we catch fleeting but incendiary sight of a tiger, probably T64, Ustaad, Ashitesh tells us. For the next 10 or 15 minutes we slowly circle and probe the jungle. And suddenly Mary says, “There he is.” Not more than 20 feet from our vibrating Maruti.

He calmly scratches against a tree, like a house cat, but vastly bigger, far bigger than my normally exaggerative mind imagined. (If you’re spellbound by tigers, get ahold of John Vaillant’s marvelously written book The Tiger: A True Story of Vengeance and Survival, a mesmerizing tale of  Shere Khan’s close cousin, the Amur, or Siberian tiger (Panthera tigris altaica). Amur Tigers are the largest of all the big cats, “roughly the size of a compact car,” he writes, making “the Amur tiger the longest (if not the heaviest) carnivorous animal that ever lived.” )

We watch as the fabulous beast crosses the road in front of us and reclines regally on a hillside. For the next half hour we watch him in his full and daily glory, presiding over his uncontested  domain. (I’m always intrigued that lions in Africa and tigers in India seem utterly nonchalant in the presence of vehicles and whispering, exhilarated humans. I know they know we’re there, because I’ve seen lions use safari vehicles to casually hide themselves from potential prey. Our tiger clearly has no doubt that we’re just odd but inconsequential visitors.)

I have to remind myself to rest my Nikon every once in a while (“What immortal hand or eye/Dare frame thy fearful symmetry?” Blake asked in “The Tiger”); I want to see that tiger as he was, not as a digital prize, but as an autonomous marvel, “burning bright,” as Blake wrote, yawning, growling contentedly, yet alert to every tumbling leaf. I see him now, as I type this on a still-foggy Sonoma County morning. It’s a memory I hope will be with me as long as I have memories.

Another, quicker sighting in the afternoon, and we return to one of the most salubrious lodgings we’re ever basked in, the Oberoi Vanyavilas. Designed in homage to Africa’s tented camps, Vanyavilas was voted #1 Luxury Hotel in India in TripAdvisor’s Traveler’s Choice Awards last year. (I wonder what people think when they read “tented camp.” Well, as we say in our Micato Africa brochure, these luxurious and restful tents “resemble the pup tents of our youth like a Piper Cub resembles a Gulfstream 650.”) It might seem a semi-irrelevant plug, but, believe me, there’s nothing like seeing the world’s apex animal and then returning, glowing, to one of the world’s finest lodgings, dining grandly, and sleeping dreamily in a four-poster bed. 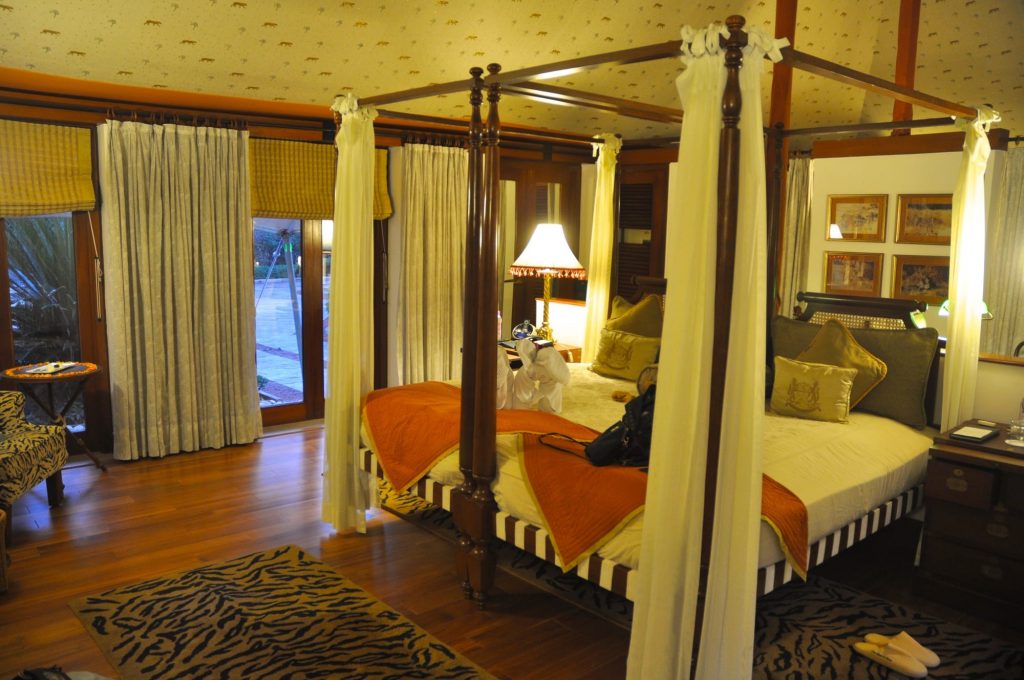 Chances of seeing Panthera tigris tigris on Micato India’s 16-day, guaranteed- and frequent-departure trip The Soul of India are good, excellent, nearly inevitable, probable, likely, and invariably exciting. And so are our other Soul of India destinations: Delhi; Agra and the most beautiful thing humans have ever created, the Taj Mahal; Varanasi, “the beating heart of the Hindu universe”; Jaipur, and Mumbai, a thrilling, world vanguard city.

Experience an Indian safari for yourself.

Up Next: A Rambling but Recommendatory Review of The Jungle Book